Object Was Unseen at the Time 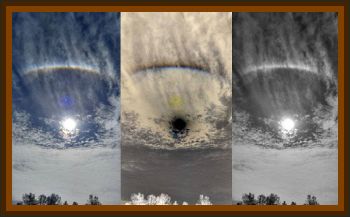 Visiting the capital and city, did not see object at all while taking the pictures, object was unseen at the time.

Took 2 pictures, object in first picture but not the second,

We were visiting Washington D.C.

After visiting a couple of the museums we were walking across the mall. While in front of the capitol building I asked the kids to turn and face me. The daughter grinned at me and I told them that I am going to take the picture again, Thats when I shot the second picture.

However the object is not in the picture, but everything else is, the clouds are the same, the people in the background were there, however slightly moved.

The time between the pictures was about 2 seconds. Since our son moved his arm in the second picture, I told them to forget it, and we moved on.

The interesting thing about this and why I remember the date, is that we happened to have been in the Air and Space Museum during the shooting at the Capitol building. We are interested in knowing what this. Sun was to my daughters left side