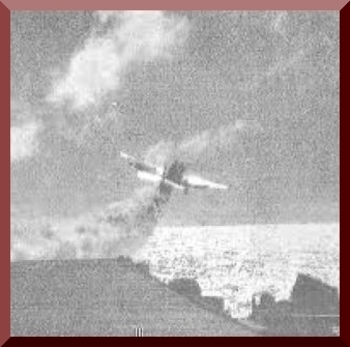 2 fighter airplanes, assigned to inspect a white dot cluster, suddenly disappear off radar, and then the cluster also disappears.

Unusual UFO recording at Project Blue Book In 1955, as part of a publishing team from Bantam Books who had published a book on UFOs,

I was invited to the inner sanctuary"of Project Blue Book. We were shown many interesting photos, but the most stunning experience came from a radar recording.

A radar record showed a number of white dots moving in formation high in the sky over Washington, D.C. Then 2 fighter airplanes were ordered up to investigate. We watched as they approached closer and closer to the cluster of about 5 or 6 white lights.

Just then, the radar dots of the planes disappeared. Then, in just a few seconds, the white lights cluster suddenly moved upward at great speed, and quickly disappeared off of radar altogether. We sat there in stunned silence, and then the questions and unhappy answers.

No, the planes and the pilots were never found. No wreckage.

They had been captured by the UFO's, pilots and planes.

No, the relatives were not told the truth. They had been told that the fighers had disappeared way out in the Atlantic Ocean.

And No, you cannot tell the truth, either. You have been sworn to silence, and you must stick to that. Otherwise, you might stir up a Hellish wave of panic.

That's it. Have never mentioned the event for the 53 years between then and 2008, when I thought it was finally time to reveal the event.