4 of us Saw a Ball of Light 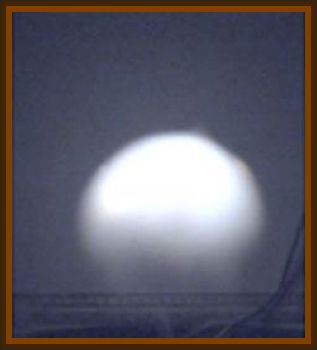 Four of us saw a ball of light come out of the sky, circle a plane then shoot off out of sight.

One of my buddies' sister was watching TV in their 2nd floor apartment and 3 of us decided to scare her by climbing up on the porch from the ground below.

The porch looked out over the Potomac river skyline where planes approached National Airport on their landing route.

It was about 8:00 p.m. 2 of us had gotten up on the porch and were lifting the last guy up when one of us saw this ball of light coming out of the southwest sky towards a plane coming in for a landing, along the river, from the west.

We dropped our buddy into the bushes below in our awe of the event but hauled him up right away and sister came running out asking what was going on. We all watched in amazement as this ball of light went around this moving plane, maybe 100 to 150 mph landing speed, in a huge circle, then shot off in the same direction it had come from and disappeared in a split second.

The whole incident took about 2 or 3 minutes. We were so excited we began yelling to people around the community and calling friends and relatives on the phone. I don't remember what reaction we got from those folks but we looked in the papers, Washington Post, Daily News, Washington Star, the next day and found one small article, buried in the A section, about the sighting that claimed it was a meteor out of its orbit.

Well there were 4 of us who knew what we saw and none of us ever heard of a meteor coming out of the sky, making a circle, then shooting back out again. I've probably told this story 5 or 6 times in the past 53 years, when someone's brought up the subject, but have never reported it or written about it before now.

I'm sure there were others that evening that saw this happening including the pilot, crew and passengers on that plane. I did lie out at night with friends in the late 1950s to watch the sky and saw interesting light formations, not airplanes, flying around as well as Sputnik orbiting the earth.

That's my experience with UFOs.