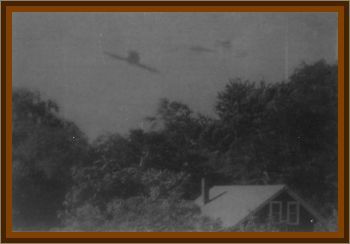 At least 15 sightings of unidentified flying objects covered with red, green & blue lights zooming about at tree top level, were reported in Southwestern Ohio. The UFOs, sighted in the Dayton-Cincinnati area, were all classified unofficial by Wright-Patterson Air Force Base officials. None were detected on radar because they apparently were flying too low. The first sighting was reported shortly after 8:00 p.m. by a New Lebanon Township officer. He didn't want to say he saw it, but he said it, Montgomery County Sheriffs deputy Michael Sullivan reported. The officer said it was oblong and covered with lights. It appeared stationary in the sky about tree top level for several minutes until he tried to shine his cruiser spot light on it, It then zoomed toward him and then shot straight up in the air, after he turned out his light, and disappeared.

Sullivan said the UFO sightings lasted from a fleeting moment to 12 minutes. They would be behind the trees and come up and fly away, as if you startled it or something, he said. No balloon, helicopter or kite can move that fast or has that many lights attached or can go so quickly in a straight up direction.

A spokesman at Wright-Patterson, whose UFO center was discontinued several years ago, said there would be no attempt to investigate the sightings unless there was an imminent danger. Sullivan commented that his officers certainly can't chase them.