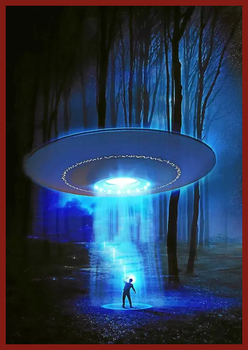 Tom Dawson made his living selling cars in Florida, then retired to the peaceful community of Pelham. He was 63, living in a mobile home park on Vada Road with his wife and daughter. He arose early that Saturday morning, then took his girl to visit Linda Kolbie, who owned a house adjacent to the mobile homes. Dawson was a frequent visitor to the Kolbie home, where he enjoyed playing with their infant son.

After chatting with Linda for a few minutes, Dawson decided to walk to a nearby pond and see if conditions looked right for fishing. He set out accompanied by his two dogs, walking through a pasture occupied by 50 cows to approach the fishing hole, located in a grove of trees. It was a beautiful day, the countryside quiet as Dawson neared the water. When he was 100' from the water, a circular space ship instantly appeared and hovered 4' above the ground in front of him. It was 40' to 50' in diameter and 12' to 14' high. A protrusion like a cabin was on top of the craft, which seemed to be colored shades of several different hues.

Dawson was frozen in place, he could not move a muscle. The cattle in his field of vision were also frozen, as were his dogs, one had a leg suspended in the air, stilled as it took a step.

A hatch opened on the ship and a figure emerged that Dawson dubbed the leader. He seemed hesitant to disembark and his first step was tentative, but then he motioned four more aliens to join him. At the same moment, two sentries appeared on top of the craft. Of the five humanoids that approached Dawson, three were men and two were women. All were beautiful and shapely, their skin a bloodless, powder puff white. Their ears were sharp their small noses upturned. They had no neck their heads sat directly on their shoulders. Their heads were hairless, as were the rest of their bodies. Dawson knew because a male and a female alien were naked. The other three wore identical clothing, beautiful and with a texture and color that defied description. Their shoes, of the same material, ended in sharp, one inch high turned up toes.

After hesitantly approaching Dawson, the aliens preceded to conduct a medical examination. A device similar to a skullcap was placed on his head. It was connected by cords to a hula hoop sized ring which contained an extensive series of dials. During the electronic survey, the creatures stepped up to Dawson and dropped his pants, apparently to check his sex.

At this point, Dawson was transported to Oz.

As each alien completed their part of the exam, they reentered the ship. The last two removed the headset from Dawson, then conferred. They had appeared to communicate during the medical tests, emitting a shrill, high pitched sound that struck Dawson as gibberish. One of the females kept repeating a word that sounded to Dawson like Jupiter.

Dawson thought the creatures were debating whether they should take him with them. They declined to kidnap Dawson and the leader waved goodbye by crossing his open palm across his chest, then they boarded the ship. Within seconds the ship quickly rose to 75' and vanished soundlessly.

Man and animals were instantly released from the force that had immobilized them. Dawson hastily secured his clothing and ran to the Kolbie house, where Linda was working in the yard about 9:15 a.m. He was in bad shape, He couldn't talk at all. I looked up to see him waving his arms and struggling for breath. She sat Dawson down and fetched a cool rag to help calm him. The man was wheezing and rocking, wild eyed, she said.

Linda attempted to learn what had happened, but all Dawson could choke out was space ship. Fearing for his life, Kolbie called an ambulance, which rushed him to the hospital. Dawson recovered, but the experience had him shaken for days. Despite experiencing the disbelief of others, he stuck to his story, saying: I don't care what they say. This is the truth...I'm not crazy. I wasn't drinking. I've never had a mental condition.