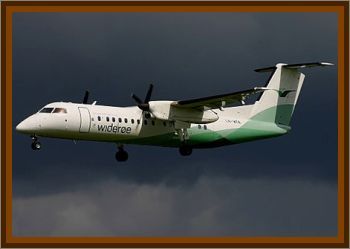 A Dash-8 passenger plane from the Wideroe company was on route from Fornebu, Oslo to Bronnoysund when something very strange happened over Steinkjer about 43 miles north of Trondheim.

The co-pilot caught sight of a flying object that moved to the right of the plane. From his left side of the cockpit the captain only saw a part of what happened:

First we thought it was another plane but as I bent down to get a better view, I noticed it had neither wings nor tail fins, says captain Erik P. Risan. It was fine weather and good visibility. His co-pilot, on the right side of the cockpit, got a better view of the object but does not want to elaborate on the incident:

I have already told the facts to the radar station in Trondheim. If I had wanted this story in the media I would have said so, he said.

The Wideroe Dash-8 plane was flying on 15.000'. Soon the unknown object slowed down and disappeared. In about a minute it was all over. The crew informed the Vaernes tower that something was in the air. Sometimes a weather balloon goes astray, but the captain does not want to speculate if this might be the explanation in this case. The military radar at Grakallen near Trondheim had coverage of the area but caught no returns from an unknown object. There were no military planes in the area. The object was considered unidentified by the military forces.

11 year old Roy Arne Hallem apparently witnessed the incident from the porch of his home at Inndalen. The boy told his parents on Tuesday evening. The incident was published the next day.

The object was very polished and almost as large as the airplane. I saw it for 30 seconds or a minute before it went straight up at disappeared at great speed, he said. Three hours later the same, or a similar, silvery polished object was spotted by 75 year old Bjarne Lein.