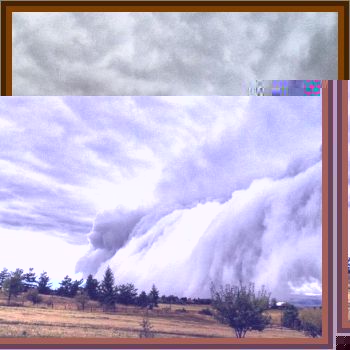 Two brothers and their two friends were hunting for Moose off the Alaska Highway at Mile 91.

They departed shortly before sunset for a planned 3¼ hour trip. Not long after departing, one of the 3 men spotted what appeared to be a forest fire on the horizon.

They then decided that what they were looking at resembled a sunset except that they saw two of them.

John O. Doe, John Q. Doe & John R. Doe got out of the truck with John Q. Doe and John R. Doe standing inside of the opened truck doors. John O. Doe then described seeing what looked like a large ball of orange light. Coming out of this ball of light were between 50 and 100 small white balls of light that looked like dripping molten plastic. The orange ball of light would shrink as each small ball of light exited it. The lights would follow each other toward the side of the gully in the mountain where they would brighten as they touched or came close to the mountain. They would then return to the orange ball of light causing it to expand as each small light entered from the back.

John O. Doe said they were watching this performance for between 10 to 20 minutes.

I’m getting out of here.

He ran three steps off to the side where he intended to jump into a ditch by the side of the road. At the same time a light appeared which he thought had been aiming at him.

All of a sudden he was hit in the right buttock and frozen and he heard in his brain 'GOTCHA!'.

He thought to himself, You got me. Then he heard a voice in his head say: We know.

The next thing he knew he was going up backwards through the air looking down at the ground below him. He could not see where he was going. He was then looking at a human looking figure that reminded him of his priest. It was the figure of a man with black hair and a black beard suspended in the air above him. He recalls that he could not move any part of his body except for his eyes and mouth. He could only see the top of this being’s body. John O. Doe said that he spoke to this person in a regular fashion but the being seemed to be communicating with thought as his mouth did not move. John O. Doe said he wanted to look down but was told not to, for he would be afraid. He made the attempt anyway and found that he could move his eyes downward. He saw what he described as perhaps a hundred small beings looking like skinny Pillsbury dough boys, presumably without hats.

He described them as looking fuzzy as if out of focus. John O. Doe was then asked by the being why he had not been frozen initially like his friends had been. John O. Doe replied that he believed that they had weak minds.

I know you guys.

The figure then asked John O. Doe to describe what he knew. John O. Doe then described how when he was seven years old in kindergarten, he was playing with small glowing objects, he followed the objects into his back door and played with them in his bedroom. He told the same story to his kindergarten teacher. She pulled him out of class and made him tell it word for word to the principal. He could not remember what the principal said. The being informed him that they were not the glowing objects but they knew who they were. The being then told John O. Doe that he would forget what had happened. John O. Doe told the being that he did not want to.

John O. Doe’s next remembrance was of being on a short wide section of stairs. He was aware of a person to his right. He believed at this point that he was going back to his vehicle. He turned to his left really fast to go up but a hand was placed on his shoulder and froze him. He was thinking that he had to warn somebody. As he was frozen two "Dough Boys" came towards him.

John O. Doe then described floating down towards his car and seeing his companions frozen in their positions. The next thing he remembers is driving down the road. John O. Doe said that he looked in his rear view mirror and watched the smaller balls of light floating above the road.

When they arrived at Fort St. John, John O. Doe told everyone he could about the encounter he had just experienced, some believed him but others seemed frightened by what he said. John O. Doe related that the experience seemed to have a profound effect on the personalities of his companions. They were very quiet, stared into space much of the time and seemed to be unfamiliar with the use of everyday items.

The group returned to the camp site the same night and all three actively related the evenings events to John O. Doe’s brother, but after a nights sleep John O. Doe’s companions said that they could not remember anything except seeing a few lights.

John O. Doe has not been back to the area since but intends to return with the same truck he was driving when he had his dramatic encounter more than seventeen years ago.