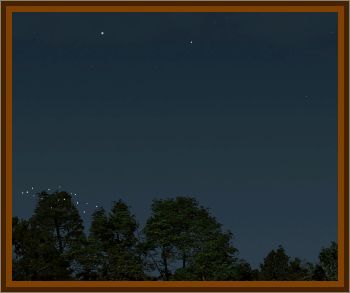 We were stationed in Cambrai-Fritsch Kaserne, Seventh Evac Hosp,Army, outside Darmstadt.

The Odenwald, a mountain range, was right outside our fence, and our barracks was 20' from the fence.

Our unit was in the field, so there was no lights out, and we were playing pool.

Between 10:00 p.m. and midnight we noticed small white Christmas tree like lights flickering in the treetops and started watching them, curious, not constantly. We then noticed the balls wouldn't go in the pockets right. They sort of veered away a little. We all thought something peculiar was going on but had no idea what.

I started getting the feeling of being watched and mentioned it. At least one other person had a similar feeling. It was really bothering us and we had a new guy, just seventeen, that it was really freaking out.

I can't remember exactly, and the date and time of day are estimates. I imagined whatever it was could read our minds and I must have been thinking UFO because I thought telepathically to whatever it was to leave before that guy freaked out completely and contact me after I got back home.

The odd feeling subsided and I went to bed. A little after laying down I had the sensation of being sucked out of my body. The legs part of me felt like they were at a right angle to how my physical body was laying in the bed and my shoulders and head were still in.

I had learned before to fight fear by concentrating on something else, and that's what I did. I'm not saying I wasn't afraid that much. I was overwhelmed and consumed by raw fear. But I noticed it made me weaker in the fight against whatever it was, so I conentrated on a girl I knew and the feeling subsided and I was able to get up.

I was afraid to try to sleep then, so I went back up to the pool table and wanted to wait until daylight to try to sleep. A while later I went up to the fourth floor to a friend of mine's room and looked out the window just in time to see an oval shaped object take off out of the top of the trees. It was a fiery orange in color.

I had been in that woods many times and there is no swamp or water within miles. There is a large clearing a few hundred yards from our fence so it might have been sitting there.

I never told anyone about seeing the UFO until I got home out of the Army. I talked to a guy that was there a few months ago and he still remembers the lights in the trees and the rest of it, but he says he didn't see anything take off.

I never saw another one, but I had many bad experiences for a few years after that I think were related to it. And I heard one landed about two miles from where I lived about a week after I got home.

About two or three years ago my mother told me that my brother would see two guys sitting in a car parked at the end of our driveway when he got up for school in the morning. What's funny is she doesn't remember that at all now.

I wouldn't suggest anyone asking them to contact you later. I never thought of myself as being psychic at all before that, but that really changed.

I've had the sense from time to time that some of them are actually very friendly but I'm not interested.