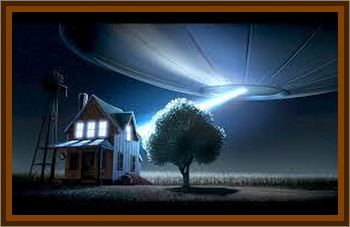 They saw a round ball of fire in the sky, and the boy began chasing it out into an open field. As the parents watched, the light came down from the sky and the boy began to scream for help. The father fetched his shotgun and returned to see that his son was being carried away by what looked like little men. The father fired several rounds at the light, but to no avail.

They found one of their dogs with its head crushed, but no sign of the boy and no footprints left behind by the little men.

The police were called but the official report read that the boy had run off and become lost in the forest. Within 48 hours, the Air Force determined that the family had experienced a true close encounter and forced the parents to relocate to a secret installation somewhere in the northwest part of the U.S. which had medical treatment facilities to deal with radiation poisoning and similar ailments.

Both the parents were in shock and required intensive psychotherapy.