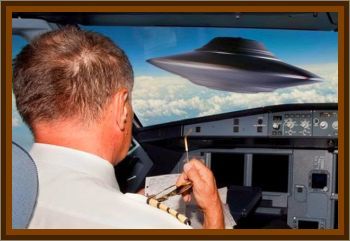 In 1989, First Officer Andrew Danziger was on a flight from Kansas City to Waterloo, Iowa, and had ascended to 15,000' when he noticed a white disk visible through clouds to the right of the plane. He conferred with the pilot, who also spotted the object. After ruling out the possibility that it was the Moon, a searchlight, or any mundane aerial object, they continued to engage in flight duties, occasionally glancing at the object.

After 20 minutes, Danziger realized that the white disk had been replaced by a massive red ball floating above the cloud cover, which was maintaining a parallel course with the flight. When the plane dropped to 4,000 13,000', the ball descended and vanished behind the clouds. Then there was a burst of multicolored lights within the cloud.

Danziger reported that the cloud itself started to stretch apart, like Silly Putty, and then the object, lights, and cloud collectively vanished. After confirming with air traffic controllers that nothing had been seen on radar, the pilot and Danziger were asked nonchalantly: Do you want to report a UFO?

They were given the number to the National UFO Reporting Center, who told them other pilots had reported similar incidents on a fairly regular basis.

Danziger’s story got special attention because he was the pilot for Barack Obama on Election Day in 2008. He also gained some notoriety for arguing that TWA Flight 800 was shot down in 1996 and never suffered from a faulty fuel tank.