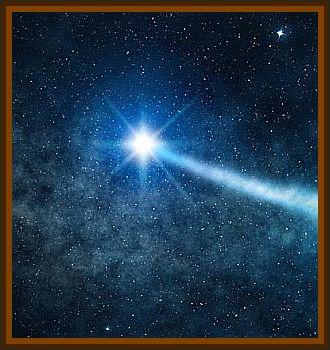 Traveling at a speed of 1500 MPH and stopping instantly displaying super bright search lights without noise.

I was just honorably discharge from the USAF in 1970. I observed, what I first thought was a shooting star, coming directly at me from space. It was traveling at a extremely fast rate of speed.

It was a mild clear star clustered night with perfect visability of the sky. After a few seconds the shooting star turned into a very bright light that lit up the entire area making it look almost daylight.

Just before the bright UFO struck us it stopped almost instantaneously.

Being in the USAF and flying in F105 Jets and working on the same, I know that this was not any type of man made aircraft.

After stopping at such close proximity to us, I notice that it resembled 2 large bell shaped search lights with tremendous candle power. I could not see what they were attached to, but I assume that these 2 large lights were attached to something.

Then the large search lights started to scan the ground traveling in opposite directions and then reversing similtaneously and moving in the other direction. They appeared to be search lights searching for something. After scanning back and forth several times the lights started moving toward the horizon at a slow rate of speed.

I observed these 2 lights until they disappeared over the horizon, all the time scanning the lights back and forth as if searching for something.

My girlfriend cried and begged me to leave. She would not get out of the car we were sitting in. I was curious and frightened at the same time, but I did get out of my car and watched this object until it slowly disappeared over the horizon.

I have told this story to all my family members but did not have the means or address to send this sighting to anyone for documentation.

I am curious if anyone else has had the same type sighting as I had.

Being a Vietnam Veteran in the United States Air Force, I can assure you that our government does not have any type of flying craft that could perform in the manner that this object did. This object went from traveling at a speed of approximately 1500 MPH to a complete stop in a matter of a second.

I am convienced that this object was guided by intelligence, wether by remote control or by occupancy. This is the first time and the last time in my lifetime that I have observed anything of this nature.

I am presently 57 years of age and curious to see if similar reports were submitted to your agency.