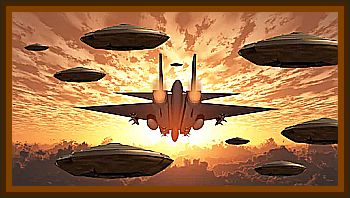 We were sitting at the end of the flight line watching the Phantom F-4 jets take off on a bomb run when we saw the first of strange lights in the sky.

They seemed to follow the jets, as a matter of fact, after talking with a mate in the tower, they were following the jets. At first there were only two lights, but in no time there were eight objects close to the jet aircraft.

We thought they were MIG’S and radioed the same, but to our dismay no MIG aircraft were seen on the radar at that time.

They continued to follow for quite some time, now this is where it gets kind of weird.

The jets came back to base and the pilots were saying they were being followed by an Unidentified Aircraft. As the airplanes landed and the objects followed them to with in approximately 1000' of the runway.

We could vaguely make out a shape of two of them, they were oval in shape with lots of lights and a very strange amber glow. The objects hovered for about 20 seconds, then they all shot off at a high rate of speed and were gone.