Horror on the Stairs 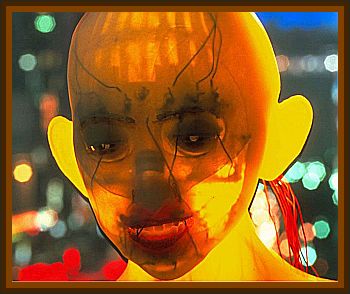 Not all anomalous entities fit neatly into the categories assigned to them: ghost, alien, demon, etc.

Some seem to purposefully defy our attempts to classify them. One such entity appeared in the unlikely setting of an army base in Cyprus in September 1968.

The witness was a British NCO stationed at the Dakelia army barracks. At 3:00 a.m. one morning, he was alerted to the presence of an intruder when his wolfhound sat up and began growling.

Fearing terrorists had infiltrated the base, the soldier crept towards the door of his room. An eerie high pitched humming sound started up outside, and the wolfhound promptly hid under the bed.

The soldier stepped on to the landing outside his room and was confronted by an unearthly apparition. Floating up the stairs towards him were the disembodied head and shoulders of a humanoid being.

The being had a glowing orange face and scarlet hair, and was wearing a light blue jumpsuit. It glared at the NCO with prominent unblinking eyes. As it approached the landing, it swivelled its head a full 180°.

A Shot in the Dark

The witness hastily backed into his room and slammed the door. The humming sound intensified to a deafening pitch. It was accompanied by a sliding noise as though the entity was dragging itself across the landing.

The soldier grabbed the only weapon at hand, an underwater spear gun, and fired it straight through the door. The sounds abruptly ceased, but the NCO was too terrified to venture outside again.

A patrolling guard discovered him an hour later, still sitting on the edge of his bed paralysed by fear.

Although the witness soon recovered from his ordeal, his wolfhound was a nervous wreck. For the rest of its life, it remained terrified of the slightest sound.