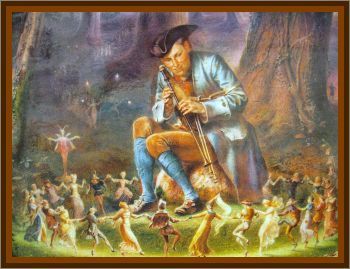 Dafydd Fawr, a farmer from Penrhyndeudraeth who thought he saw a fairy dance but may actually have had a close encounter of the third kind.

Dafydd was on his way home from the market when he saw a small comet fall to the ground, followed by a hoop of fire.

Two small figures appeared from the flaming hoop, drew a circle on the ground and started to dance around it.

Dafydd watched amazed as more little people, both men and women, seemed to appear from nowhere and join in the dance. The fairies, as Dafydd thought they were, danced for a few minutes until the first two figures climbed back into the hoop of fire and flew away. The rest of the fairies vanished.

Dafydd continued home, a journey which would normally take him about 20 minutes. When he got home he found he had lost three hours.

According to a writer, the fairy dance episode had all the characteristics of an alien landing: a strange object comes out of the sky, unusual humanoid figures emerge and leave a circle imprinted in the ground, and the suspicious Dafydd watches awestruck before realizing he has lost hours in what seemed like minutes.