Daylight Encounter with an Unusual Being 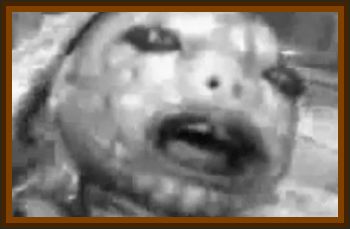 According to a story first reported in a new magazine called Unknown, a woman named Katherine, K.T., Francovich had a sensational daylight encounter with a being that seems in many ways similar to a so called grey alien, but with some notable differences.

Bell then interviewed Francovich live on the air. Both interviews can be heard via Art Bell’s AudioNet Archives on the web.

Howe began her radio segment by saying that K.T. Francovich has had a long career as a wildlife photographer and filmmaker and is, therefore, a skilled observer and comfortable in the wild. She comes from a family of filmmakers. Her great uncle Mike Francovich Sr. was once president of Columbia Pictures, and 2 of her cousins were involved in producing such acclaimed films as Exodus and Lawrence of Arabia.

Judging from the tone of the interview, K.T. Francovich is down to earth, highly intelligent, and physically fit.

The incident began as Francovich was walking 2 large attack trained dogs on leashes through a deserted grove of dying, leafless lime trees in southern Florida.

She heard a loud noise as if someone were cutting down a tree with an axe. Turning toward the noise, she says, she saw a humanoid being standing by a tree. The being had grayish pink skin, non porous, and almost plastic looking.

She estimates the being stood 4' 9" tall. It was wearing snug fitting, metallic looking clothing that clearly showed the shape of its body.

The most alarming thing that caught my attention immediately was the head, Francovich said. The upper part of the skull was disproportionately wide, the eyes were huge, black, and almond shaped, with no whites or pupils visible. It had 2 tiny nostrils where we would think of a nose being, and the lips were very small and not well defined at all, just a tiny slit in the face. Its ears seemed to be dropped down a little bit and were very much smaller than ours, pressed flat against the head, Francovich said.

The body was as startling as the head because the upper torso did not match the lower torso. The arms were very long, without what we call muscle tone, very skinny, extending into very long hands. The hands were 6 fingered, definitely 6 digits on each hand. I know, because I counted them more than once. The thing that fascinated me about the hands, because I’ve worked quite a bit with primates, is that the thumb, of this creature, was in the exact location of where the human thumb is. So there was a thumb and 5 fingers, instead of 4.

The neck was again without muscle tone, thin looking. The shoulders were not well defined. It had a very slender frame and what appeared to be a little pot belly, just a little round.

But then, once you came down to the thighs, an extraordinary thing happened. The thighs were actually over developed. Coming down to the calves, they looked exactly like the legs of a well trained athlete. I mean bulging muscles.

The feet were small, I would say too small for the rest of the body, particularly those well developed legs. On the feet were what looked like a cloth boot, made out of the same metallic material that it was wearing for clothes.

I want to tell people that I was shocked, shell shocked, Katherine told Howe. I’ve worked with quite a few dangerous animals in my lifetime, worked up close to them, but I’ve never seen a being like this. It wasn’t that I was afraid of it attacking me, because I had no time to think of that. What shocked me was that I couldn’t identify it. And one thing I can stress to you is that it was just as shocked as I was. We both were at a dead stand off, staring at each other.

Linda Howe then asked Francovich if she felt any unusual energy, controlling force, or telepathic communication coming from the being. Howe noted that the Unknown magazine article said Katherine’s dogs, normally aggressive, just sat down quietly in the presence of the being.

Regarding any kind of controlling force, I don’t like to guess. But I will most definitely say something out of the normal was taking place. These were 2 huge, aggressive, attack trained dogs. And both of them, the moment they looked at this being, did lay down on the ground and put their heads down, just as if they were sound asleep. I can’t tell you whether this being was controlling them mentally, but I can tell you this was very bizarre behavior.

This stare down lasted quite a while, because I had enough time to go over this body several times, and a million things were going through my head, Katherine said. But then, something even stranger happened. The being began to run.

The moment I saw it run, I understood its legs. I had never seen anything like this in my life and I’ll never forget it as long as I live. Do you know what a Thompson Gazelle is? she asked Howe.

Right, they kind of spring, like they’re on pogo sticks or something, Howe replied.

Exactly. When they run, when they come down and hit the ground, it’s exactly like you said, like pogo sticks, leap, leap, leap, with very little effort. This is exactly how this running. It would actually spring, I would say, easily 3' up every time its feet touched the ground. He looked like a gazelle in motion.

Well, I took off running with him. We ran neck to neck down this grove. The dogs were running beside me, although at no point did they ever start barking. We ran quite a distance. It’s a darn good thing there weren’t any telephone poles in my path, because I never took my eyes off him. I couldn’t. I would have smacked right into a telephone pole and knocked myself out, that’s how concentrated I was.

We ran, I would say, a distance of several city blocks. It was the most fascinating thing I’ve ever seen in my life.

Francovich said that they finally came to a kind of tunnel that was formed from densely growing vines on the dead trees. He darted right into it and disappeared. The moment he entered that tunnel I was still in motion, running with him.

I hit a wall of stench as I have never hit in my life. It was a combination of sulphuric acid and formaldehyde. It was so strong that it actually burned the lining of my nose. It was like running into a concrete wall, that strong.

I knew instantly that there were others in that tunnel, a lot of them. I knew that they were waiting for me to follow him. And I actually exclaimed out loud:

I turned on my heels and literally dragged those dogs at a full run in the opposite direction. I would say we ran a good mile and a half.

Linda Howe asked Katherine if she went back to that spot later.

She said that she and the dogs went back the next day and had a different kind of encounter.

I had my dogs, was running them, and low and behold, here comes this black car, right at me in the grove. Government plates.

It pulled up next to me. 2 fellows sitting in the front seats, both had on black suits. The one sitting nearest to me on the passenger side said:

Have you ever seen anything strange in this grove?

And I wasn’t about to tell him or anybody else what I’d seen.

Francovich said that the man gave her a business card that had a raised gold emblem of the White House on it, but no other information that would connect them to a particular agency. After a brief conversation, they drove away. Katherine was left with the impression that these men already knew about the beings and were mainly trying to determine if she knew anything.

At first, she kept the details of her encounter to herself, but then told her husband, David Cobb, who recently wrote the article that appeared in Unknown magazine.