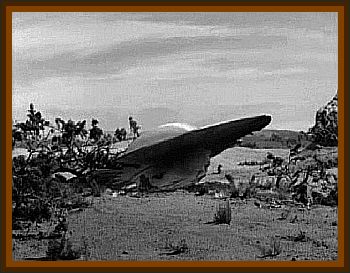 A multicolored ball or globe shaped UFO was seen to fall in a field, or near a field, belonging to Eva Braun’s parents, this was the future mistress of Adolf Hitler.

The area was cordoned off by SS troops from the town of Jelenia Gora, called Hirschberg at the time.

The crashed disk was transported to the Hirschberg SS base and kept under very strong guard and super top security. The disk was 20' in diameter and 12' high. It consisted of a large overwhelming dome, encircled by a narrow outer rim, and smaller flat dome on the bottom with a flat lower section. The top of the dome was also flat and large. The craft had 6 oval shaped structures resembling portholes but not transparent, or devices that radiated some type of light, located near the base of the upper dome.

On the lower surface of the outer rim the craft had 12 lights. The color of the disk was a dull metal gray. There was an insignia on the dome resembling the letter T with 2 props on its sides.

The entrance into the disk was found on the top of the upper dome. The general shape of the disk resembled that of a German soldier’s helmet with a small protrusion on the bottom. Inside the circular cabin were 3 small seats, there were control panels around the dome and 3 alien beings were found, one was dead, the other 2 were alive. One of the live aliens died soon after the crash, and the second live alien remained in custody for about 45 days and then died. The aliens were small Dwarfs about 3' in height, with large hairless pear shaped heads, small dystrophic looking bodies, long narrow hands with 4 fingers, grayish skin and large dark slanted eyes. The Germans were afraid to move the disk to a more distant location, out of apprehension that it might explode during a long trip during transportation. So, a research laboratory had to be constructed nearby.

From Hirschberg the disk was removed to a more secured underground location, which most likely, was called Der Riese a Nazi complex in the nearby Gory Sowie mountains, now in southwest Poland, which was also a site being used for excavating for uranium ore. This complex had an extensive network of underground hangars, connected by tunnels. The bodies of the occupants and the living extraterrestrial were also moved into this complex. The alien that lived for a little bit over a month apparently supplied the Germans with some type of information and was desperately asking the Nazi medical doctors for help, but they could not help him because of the different biological structure of his body. The alien died from an unknown illness.

The origin of the crashed craft was apparently the double star system RA known on earth as 78 mu-1, Cygni, 73.1 light years in distance. Among the information given to the Germans by the surviving alien was that they had built underground bases in the polar region of the Canadian Northern Territories maybe Baffin Island. This data was supplied to Adolf Hitler himself. But no substantial technical data was in fact provided by the alien that could had help Nazi scientists to cope with the alien technology, despite their desperate attempt to obtain such data.

The surviving alien also informed the Germans that the crashed was caused by some kind of technical malfunction. The alien was kept and interrogated at the same underground installation as the disk.

Adolf Hitler and some other top Nazi figures including Wernher von Braun and Air Marshall Hermann Göring inspected the crashed disk, the alien bodies and consulted Nazi scientists in an attempt to use the object as a super secret weapon. Among those scientist involved in investigating the crashed disk were, Max Von Laue, Otto Hahn, who discovered nuclear fusion, and Werner Heisenberg. Fortunately, and unfortunately for the Nazis, the alien technology was extremely sophisticated and difficult to understand. The disk inspired some Nazi scientists to construct different models of disk shaped planes and the so called flying bombs.

This crash and possession of the extraterrestrial spacecraft was one of the factors that possibly inspired Hitler with extreme self confidence to start World War II, hoping to use the craft as a sort of super weapon that would eventually help him conquer the world. Because of the approaching Soviet troops the whole underground complex was blown up, and the disk and the alien bodies were buried in one of the underground tunnels, the entrance was sealed with numerous huge rocks.

The whole story seems to be weird:

The town Czernica is in Silesia which was a part of Germany until 1945. If an UFO crashed there in 1938, it was a German town. So the story of Germans seizing the crash site after the invasion is wrong. The authors writing about Haunebus never mentioned the Czernica crash.

The other story about the Czernica crash gives the date 1937 and tells about German occupation. The occupation of Poland started 1939. Even if the Czernica crash took place in a Polish town the date is wrong. The family of Eva Braun was living in Munich for generations. Eva Braun´s father was a teacher for joinery. It is very unlikely and nowhere documented that he owned land far away in Silesia.

Yes, the new UFO Magazine, UK, is on the stands, hidden at the back where sensible people will be able to avoid it.

One article, UFO crash at Czernia, is a hilarious brand of Nazi pseudo history, factual inaccuracy and a desperate attempt to shore up the ET recovered technology myth.

Graham Birdsall seems to have completely lost his sense of objectivity This kind of thing serves only those who wish to distort the truth about flying disk technologies. All I can say is that I hope the spooks pay well for such marvellous disinformation.

The story has it that a UFO crashed in Poland on land owned by Eva Braun’s parents no less, in 1937. So far so bad but what else? It was recovered, not by the Polish cavalry, at this stage still on horseback, but by a detachment of Waffen SS troops, 18 months before Gleiwitz and the subsequent invasion of Poland by Hitler’s troops.

In Poland the recovered UFO taken by, non existent SS troops, was no doubt back engineered and converted by means unknown into a flying disk. All this in 3 years and Rudolf Schriever must have lied when he claimed to have adapted his VTOL disk idea from those of William Horton Zimmerman in the U.S.A.. Even more unusually, he employed jet engines which, although in their infancy were no match for alien hardware no doubt deciphered via telepathy.

ET and Hitler link up? Only in your wildest dreams people. The author of this terrible article, a disgrace to Ufology in fact, then finishes off the piece with a load of old, very old and very sad, crap about Vril, Haunebu disks etc. etc.

As I pointed out the V designation relates to Versuchs, the German word for experimental.

It is desperate stuff totally lacking in any evidence and entirely without a factual basis. But idiots will believe it and idiots will buy it. Sales of Peter Moons’ ridiculous Black Sun Nazi/occult/Mountauk right wing propaganda may even be encouraged as a result. This nonsense will not deter us from seeking both truth and reality.