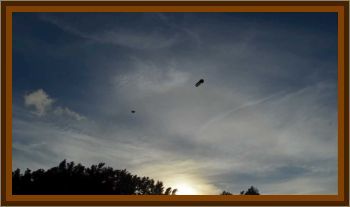 This cylindrical appearing UFO was photographed over New York City.

The photographer's name was deleted from Project Blue Book's files, as were most names when the material was finally declassified and released.

Upon investigating the report, Project Grudge officially labeled it: The Moon.

Some ufologists have speculated that tubular objects of this sort may be mother ships, Purportedly capable of taking on and discharging smaller craft in stacks, poker chip fashion.