UFO Had Capabilities Way Beyond Anthing We Have 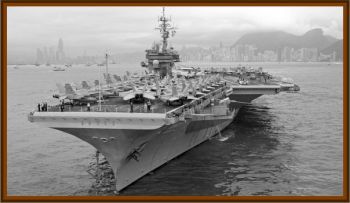 This experiene happened off the coast of Vietnam in the Tonkin Gulf during the Vietnam war. At the time I was in OI division, Operational Intelligence. I was a Radarman/Electronic counter measures and also trained as a lookout, so I had good observational skills.

I was on port lookout duty that night and another person was on starboard lookout duty. We both observed a light, that changed colors, off the port side of the ship a aproximatly 15 miles away and 20° from the horizon.

I called CIC, Combat information center, to see if they had anything on radar. They reported that they did not have anything on surface or air radar in that area of the sky. The light seemed to hover in place for about 1 minute then shot over head stoping off the starboard aft at about 10 t0 15 miles and about 30° off horizon. The speed was so fast thar it left a streak of light as it traved through the sky. The distanced traveled was, we guessed, about 20 to 30 miles in about a second or two.

Being in ECM I knew what air craft the U.S. and U.S.S.R had at the time and nothing could match the maneuvers this light was doing.

We called down to the bridge to see if they had anything on there radar and to report it to the duty officer. They reported no contacts in that area either. The light hovered there for a few seconds then came toward the ship, it got about overhead and then shot straight up and disapeared within a couple seconds.