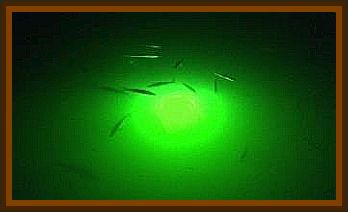 In mid summer 1974, I was stationed onboard the USS Forrestal (CV-59) in the Mediterraean Ocean.

My rate was an E-2 signalman, that means I get to stand all the worst watches. My duty station on the ship was the signal bridge a small open deck area above the con tower, where the Captain and the Executive Officer, XO and the flight boss run the ship. I had just taken my watch at 02:00.

My job was to be the ships eyes, very boring really. I had just poured myself a cup of coffee and lit a cigarette and picked up a pair of binoculars as I headed out on to the deck of the bridge, I walked to the edge of the bridge and looked over the 4' steel railing down towards the flight deck all was quiet, no movement. then I thought to myself:

Boy I can see all the way down to the bow of the ship. Sure is bright out tonight, I turned and looked up to see a 3/4 moon, nice nite. I leaned against the railing and set my coffee down and begain to scan the horizion from port to starboard, no waves, just flat smooth water as far as the eye can see.

At that elevation of almost 180' off the water viewing distance is about 20 miles on a clear night.

As I look from starboard back to port along the horizion line, out I would have to guess at about 8 miles was what looked like the reflection of the moon on the water but it looked kinda funny, so I pick up the binoculars and focused in on it. What I saw was what appeared to be a bright light, but under the water. I then walked over to the ships squak box, intership radio, hit the switch, leaned in and said:

A second later a voice cracked back

Con I have a contact bearing 210 off the port beam, can you confirm?

We have negative sonar contact, do you have visual?

Affirmitive Con I have visual.

I turned, picked up my coffee and heard footsteps behind me from the ladder leading up from the bridge. Within 10 minutes, I had the captian,the XO, the flight boss and what had to be 8 or 10 officers from IOIC, Integrated Operational Intelligence Center, All on my bridge. For the next 20 minutes we all watched as this thing moved back and forth across the bow of the ship at what had to be from 60 MPH up to over 100 MPH cutting a zig-zag pattern back and forth in front of the ship all this under water.

At one point it stopped directly in our path and allowed us to come within about 4 miles of it. Suddenly it pulled away like we were parked and disapeared into the depths.

Standing in the background behind all these officers I kinda felt out of place, so I retreated to the signal shack sat down at the desk and begain to fill out my log on the preseding events. Just as I was finishing up my report, a Lieutenant stepped into the doorway of the compartment and said the XO would like to see you, and bring your log. As I followed him down the ladder I was thinking I'm in trouble for something. He opened the door to the Captains quarters and in the room were no less then 6 officers.

The look on there faces was not good. The first to speak was a Commander I did not recognize, his words seemed funny to me in the context of what had just happened.

What do you think you saw this evening?

I have no idea sir.

Well these events are currently under investigation by the Navy, and you are hearby ordered not to speak of these events to anyone, not to your section chief, your division leaders, not even to your buddies. Do you understand?

He looked at me with a very serious look and said:

Very well, you may leave your log on the desk on the way out, you're dismissed.

Turned and stepped out into the hallway as the door closed behind me.

I took two or three steps stopped, and put my back to the wall. And just slid to the deck. A Lt. stepped out of the room and I jumped to attention and stood there in front of him, he said:

All inquiries concerning your log are to be fowarded to the XO's office, Is that understood?!