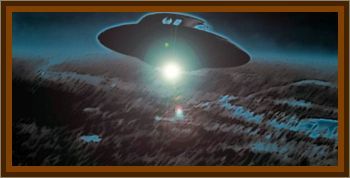 Carmen Cuneo, a mine worker, stepped outside briefly and saw two aircraft hovering about 12' above the ground near the lower part of the mine. One of the craft was cigar shaped and estimated to be about 36' long with four small, evenly spaced windows along the side facing Cuneo. The other object was disk shaped and appeared to be about 15' in diameter.

The most surprising thing, however, was the presence of three small men wearing hats similar to those worn by miners, who were moving about under a boom or aerial which protruded from one end of the cigar shaped object. On top of each of the helmets were four amber lights.

Cuneo stood and watched in fascination for about ten minutes, then decided that he should get someone to verify what he was seeing, so he went inside and called his friend, Merv Hannigan. The two men went outside, but the little men were nowhere in sight. However, they watched the two objects which continued to hover in the same spot, for a total of twenty minutes. At 3:05 a.m., the two craft took off toward the southwest with many colored, flashing lights in evidence. No noise was heard during the craft’s presence at the mine nor during takeoff.

After the sun came up, Cuneo went to the area to investigate and found a large gouge in the ground and an oil residue on the burdock leaves. The oil was analyzed and was found to have no unusual elements, but it was not an ordinary type of lubricating oil.