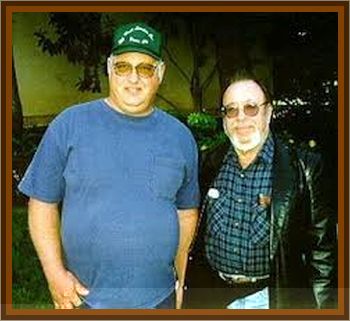 Tim Cullen is a hard working cement contractor from Yuma, Colorado. He was raised there, and resides with his wife Janet, and three daughters. 3 things happened to Cullen in 1978 that changed his life forever. He suffered a terrible car accident, saw his first UFO, and suddenly realized that both events had appeared to him in dreams well before the actual occurrences. Was he then also psychic? The events that have happened to me over the past 27 years have had an enormous effect on my life and what I believe, Cullen, a practicing Catholic, mentioned. In a short span of time in 1978 it was revealed that we are not the only intelligent life in the universe, and it was also proven that God is with us always, without a doubt.

On April 2, 1978 Tim Cullen dreamed that he was in a terrible car accident. On April 9, 1978, he & his friend Ken Ruberg, were driving on Highway 34 when Tim realized he was living out his dream. I thought about stopping and going back to town but didn't, Tim said. Seconds later, he rolled the car five times, breaking his neck on the first roll. Ruberg helped Cullen up out of the ditch, and waved down a passing station wagon. They took Cullen to the nearest hospital.

The event was a replay of his dream. While in the hospital, under sedation, Cullen dreamed of an encounter with a UFO. Returning home from a medical check-up in Denver on May 30, 1978, Tim and wife Janet, a registered nurse, were driving north on Highway 59 near the Vernon Road junction, about a quarter mile north of it. It was dark, after 11:00 p.m. Tim saw a large dimly lit object pass in front of the car, go behind a low hill, and re-emerge then, It went out a ways, along side, and as he brought the car down to a stop, it came back toward us a bit. He backed the car up, and the UFO went out to the west of us. It came in under the power and telephone lines and hovered over a pasture. It was about a 100' long & 20' wide, and about 10' high, Cullen remembered. It made no noise. There were 2 diffused lights that shone at the back of the craft, one a light yellow, the other red. We couldn't see very good. We sat there and stared at it for awhile. After we looked at the two lights for a few minutes I turned to my wife and told her we might as well go on to town.

Janet was five months pregnant with their first child. The Cullens have no memory of being taken aboard the craft, nor of any missing time. Now, when he thinks about it, when he turned and started driving, He had an odd feeling, but it didn't really register with him. He remembers coming back to Yuma, but not looking at a clock. He was kind of shocked by the whole thing, and didn't really think of looking at a clock. 20 years later in 1998, while setting rebar at a job, Tim Cullen hit his thumb with a hammer. Sometime later, he thought the finger might be dislocated so he went to see Dr. Mark Hubner at the Yuma Clinic. The doctor suggested they take an X-ray. On returning with the film, Dr. Hubner asked, Did you know you have a piece of metal in your arm? At that moment, Tim Cullen knew what the object was. He knew that he and Janet had experienced missing time in 1978. In 1980, Cullen experienced another encounter, at exactly the same spot. The craft hovered and two diffused yellow lights came on. Then one started blinking, and he stared at it. This can't be happening! he thought. Not right here.

The craft kept moving in back of, and out from behind a low hill. Then it moved slowly away from him. Figuring they didn't want him to see them, he got back in the car and returned to Yuma. Again, in 1994, with his wife and daughters, they encountered a smaller craft with a strobe light, about forty miles south of Yuma. It hovered off the road in front of us, and we stopped and looked at it for 5-10 minutes. It moved around for awhile and finally went off to the north, he related. The girls seemed mystified by it, but they were younger and I don't really think they realized the enormity of what they were seeing. Tim didn't think much about UFOs or abduction before his experiences, and had never heard about alien implants. But after seeing the X-ray, and knowing where the object in the film came from, he started exploring the internet about the subject of UFOs and abduction. He joined an on-line encounter group, and learned about a Dr. Roger K. Leir, who removed what were reported to be Alien Implants. The 2 communicated for over a year. The 9th alleged alien implant was surgically removed from the left forearm of Tim Cullen on Saturday, February 5, 2000. The operation was performed at a medical facility in Thousand Oaks, California. The procedure was performed by a surgical team led by Dr Roger Leir, the surgery by Dr. John D. Matrisciano.

I know nothing about UFOs or implants, Dr. Matrisciano said after the operation, but I think that's what is needed in this case, to be objective. Removal of the small, melon seed type implant went very quickly, and smoothly. The operation was videotaped by The Learning Channel for an upcoming show. Recently, at a MUFON Board meeting, I saw videotape of the object that was removed, which was shot through a microscope. The object was about 7cm x 4cm. It is covered by an amazing reddish-brown membrane and has several long, proceptors which were connected to nerve endings on one end. A dark area reveals a metal core. When a magnet was placed a ½" from the object, it literally leapt to the magnet. As yet, the object has not been sent to anyone for analysis. An appropriate laboratory is being sought, as are funds for performing various tests of the object.

Tim Cullen has become very outspoken about his experiences and about the object that was recently removed from his arm. Unlike others who have had implants removed, Tim has allowed his name to be used in the press, his phone number, and Email address. On returning to Yuma, Colorado after the implant removal, Cullen told his story to Yuma's local paper, The Yuma Pioneer, and addressed both the congregations of his Catholic Church, and his wife's Presbyterian Church. He has also been on the Art Bell Dreamland show with Dr. Roger Leir and host. While at one of the church presentations a woman reached out and touched Tim's sleeve. My husband and I know exactly what you've been through, she told him.

Tim plans to talk with them. Another man E-mailed Tim and told him of an experience he had had. Many have come forward with stories since his return from the implant removal. A lot of people around here have seen strange lights in the skies, Cullen reports. Yuma is an agricultural area. They raise a lot of corn, pigs, and cattle here. Many of the ranchers have reported cattle mutilations, several within the last few months. One lost a prize bull. Understandably, the ranchers are angered and frustrated about these events. They did not understand why they happen. Tim does not like not being able to remember what happened to him when the object was planted in his wrist. He is considering going through hypnotic regression in California to see if his subconscious can reveal any answers, as it has in others. He now admits he thinks he has been abducted. Why is he being so open? Analysis from 7 of the 8 other implants removed have shown that the membrane surrounding the metal objects seems to keep them protected from foreign object rejection.

This could be a huge medical breakthrough for doctors who want to use biological, metal, or implants of other materials, in their patients. Several prestigious labs have chemically broken down the make-up of the membrane. With the proper research, funded by large pharmaceutical companies, human body rejection of such implants could save many lives in the future, said Cullen. I'm coming forward because someone has to put a face to the alien stories, and cause more people to come forward, Tim Cullen told the Pioneer. The more people we can find with implants, the more evidence we're going to have. We can study things a lot more and get things done; get rid of the stigma around it. Tim Cullen says proudly. The truth needs to come out!