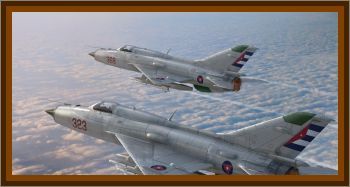 CAUS, Citizens Against UFO Secrecy, received a story by a security specialist who was assigned to the 6947th Security Squadron centered at Homestead Air Force base, in Florida, a unit of the USAF Security Service, AFS. The specialist had attended a lecture in 1978 by nuclear physicist and UFO researcher Stanton Friedman and informed Friedman of the incident at the conclusion of the talk.

The 6947th Security Squadron's mission was to monitor all Cuban Air Force communications and radar transmissions. One hundred of the squadron's men were assigned to "Detachment A”, located at Key West Naval Air Station. Several of these units were scattered geographically to enable direction finding equipment to locate fixed or mobile land based radar sites and communications centers, and to plot aircraft movements from flight transmissions.

One day in March 1967, the Spanish speaking intercept operators of Detachment A heard Cuban air defense radar controllers report an unidentified bogey approaching Cuba from the northeast. The UFO entered Cuban air space at a height of 33,000' and sped off at nearly 660 mph. 2 MIG-21 jet fighters were scrambled to meet it. The single seat MIG-21 UM E76 is the standard top of the line (at that time) fighter supplied to Soviet block countries such as Cuba. It is capable of Mach 2.1 in level flight, service ceiling of 59,000', and combat radius of more than 300 miles on internal fuel. The jets were guided to within 3 miles of the UFO by Cuban ground control intercept radar personnel. The flight leader radioed that the object was a bright metallic sphere with no visible markings or appendages. When a try at radio contact failed, Cuban air defense headquarters ordered the flight leader to arm his weapons and destroy the object.

The leader reported his radar was locked onto the bogey and his missiles were armed. Seconds later, the wingman screamed to the ground controller that his leader's jet had exploded. When he gained his composure, the wingman radioed there was no smoke or flame that his leader's MIG-21 had disintegrated. Cuban radar then reported the UFO quickly accelerated and climbed about 98,000'. At last report, it was heading south - southeast towards South America.

An Intelligence Spot Report was sent to NSA headquarters since AFSS and its units are under NSA operational control. Such reports are standard practice in case of aircraft losses by hostile nations. NSA is required to acknowledge receipt of such reports. But the 6947th's 'Detachment A' did not get one. So it sent a follow up report.

Within hours, Detachment A received orders to ship all tapes and pertinent data to NSA and to list the Cuban aircraft loss in squadron files as due to equipment malfunction. At least 15 to 20 people in the Detachment were said to be fully informed of the incident. Presumably, the data sent to NSA included direction finding measurements that NSA might later combine with other site's data to triangulate the location and altitude of the MIG-21 flight paths. If the AFSS equipment in Florida was sensitive enough, the UFO could have been tracked by its reflection of the Cuban ground and airborne radar.