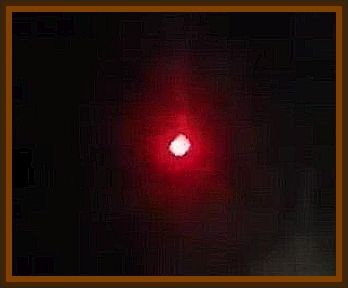 Back in 1969 or maybe 1970, can't really remember the date, my wife and I were on our way to Rhode Island from Connecticut.

We left in the early evening and by the time we reached the border it was dark. I happened to see a moving red sphere in the sky and mentioned it to my wife, the sphere seemed quite high and was about the size of one's small fingernail. We watched it on and off until it was out of sight. We talked about it a bit until we reached our destination.

On our way home later that evening, there it was again, we were on a dark stretch of road with trees on both sides and I told my wife I had to stop and see if I could get a better look.

I got out of the car and was searching for the sphere, all of a sudden an enormous object appeared directly over my head, it made no sound and seemed to be not too high over the trees.

My guess is that the craft was about 100' or so in diameter, it cast a bright red glow which covered the entire area we were in, as I looked up under this thing I could see three spoke like features, they looked like they might be a silver tone with a red glow reflecting off them, the rest of the underside was very dark with a reddish look. I later thought that the under side of this thing reminded me of an automobile steering wheel with the spokes angled either upward or downward, which way I couldn't determine, but it was fascinating.

My wife began to yell at me to get in the car, that broke my fascination and I jumped in the car which was still running and sped away, as I looked in the rear view I could see the red glow and all of a sudden the thing just flicked away. Except for a few friends, I never reported what we saw. At the time people who reported such things were considered loony, so why bother, nobody would believe us anyway.