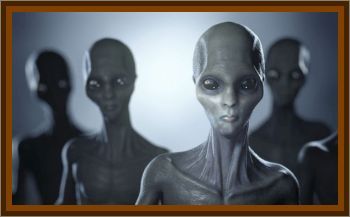 Vivian Cruz, 16, was stirred from a deep sleep by the barking of the family’s two watchdogs. She also heard the sound of zinc plates out in the backyard being moved around. Fearing that a burglar may be trying to break into the house, Vivian decided to go take a look. She was greatly surprised to find five individuals on her family’s property, but she was even more surprised by their appearance.

The tall ones were slender and looked more human, they wore tight fitting dark clothes, like a scuba diver’s outfit. Their ears were very long and pointed and their faces were grayish.

She also noticed that their hands were very large and that there was some sort of webbing between the fingers, like a duck.

The entities had lights on their chests and around their waists.

The smaller of the five creatures in the backyard were just short of nightmarish. They had a more normal looking body, although their arms appeared to hang loosely and to fall forward, which made them look hunchbacked, although they weren’t.

Fear was replaced by fascination, and Vivian woke her younger brother, Jose Celso, to the share the bizarre event with her.

The creatures appeared intent on finding something in the backyard, moving the zinc plates aside to look at the soil. The witnesses also noticed that the chickens and one goat that occupied the patio were also a source of interest to the humanoid creatures. Curiously, the animals did not appear to be in the least bit concerned about the strange beings. At one point, one of the tall beings noticed a broken side view mirror lying on the ground and after examining it with great interest for a few minutes, placed it carefully where he had found it.

One of the smaller creatures developed an interest for a water container reserved for a duck kept in one of the cages, and appeared to take a drink from it. At no moment did the quintet of entities make a sound.

According to Vivian there was a metal plate next to the broken side view mirror which they used to cover a hole in the chicken cage. The following morning, when they decided to take a closer look at the site, they noticed that the silhouette of a hand had become etched onto the metal plate, the plate was so hot that they had to wait until the afternoon before they could touch it.

They also noticed strange wet spots caused by some sort of liquid where the creatures were standing. At one point, the creature whom Vivian and Jose Celso took to be the leader of the group turned to look at the human youngsters. Its face was grayish and elongated with a pointed chin. The head was pear shaped and surmounted by a crested helmet, the large heavy lidded eyes appeared to glow in the dark, like those of a dog.

The observers added that the creatures did not appear to walk, but to move around by a series of small hops.

An interesting fact was also noted: all five creatures had what appeared to be shiny metallic medallions hanging from their necks.

At this point, Jose complained of feeling unnaturally tired, as if something was forcing him to go back to sleep.

Vivian Cruz estimated that the sighting lasted approximately 30 minutes, and would probably have gone for longer, if a car had not driven past the house at the time.

The creatures appeared startled and moved out of the backyard toward an empty lot bordering 65th Infantry Highway.

There was apparent corroboration to the youngster’s account. Luciano Rivera, 48, and an unnamed mute friend had gone out on the town and ended up parking their car next to the Centro de Servicios Multiples building on a service road on 65th Infantry Highway. The men had turned the engine off and had proceeded to take a nap within the vehicle. At one point Mr. Rivera woke up intending in having a drink of sangria which they were carrying in the car when he noticed a structure which resembled a flying saucer about 40' away from their car, resting on 3 metallic struts.

The object was described as a saucer surmounted by a large metallic dome with projected a dark orange light. An antenna projected from the dome, giving off bright flashes of white light. Rivera promptly nudged his companion to waken him, the other man was clearly concerned by the sight.

When they started the car to get out of the area, fearful that one of the flashes of light issued by the antenna would strike them, they noticed 5 figures walking clumsily along a slope, which unbeknownst to Rivera led to the Cruz property.

The figures floated along the ground and along the sidewalk, ultimately entering the landed vehicle by means of a ladder projecting from its underside. The saucer retracted its struts and rose off the ground, shooting off eastward into the night sky.