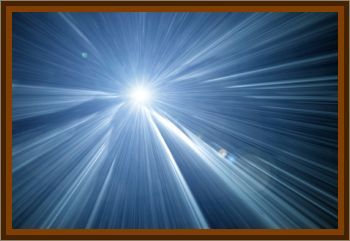 Crusheen is a village just 6 miles from Ennis, not far from the famous Galway Bay.

Traditionally, the local families were buried on an island called Inchicronan, set in a small lake two miles to the south, next to the ruins of an old priory, a monastery. A raised causeway, often submerged in winter, links the island to the western shore. If you were one of those with your family graveyard on the island, then according to tradition, you would be granted the dubious privilege of being informed a day or two beforehand of your impending death.

At that time, and you might still be in perfect health, two candlelike flames, of unequal size, would spring up on the island and then, moving at a height of about 6', proceed across the causeway, down the roads, and up onto the rooftop of your house, there to rest a few minutes before returning the way they had come. These are very similar to the Corpse Candle folklore of the European rural people.

Needless to say, such a phenomenon could not be present without a legend arising to explain its origin. It is said to be the ghost of a lazy monk who, having failed to answer the summons of a dying woman, leaving her to perish without the last rites, is now doomed to do penance by warning others of their fate. Superstition. you may say. But engineer, P. Corbett, who often stayed with relatives in the village, had a sobering experience. He was visiting his uncle's family when, out for a night time stroll with friends, he saw a peculiar light approaching down the road. At first, he imagined it was a feeble lantern. But as it came closer, he noticed it was moving, naked and unsupported, about 6' off the ground, and created no luminescence around it. Closer still, and it resolved into two candlelike flames, one bigger than the others. One of his companions cried out that they were the Island Lights. As the flames drew abreast, Mr. Corbett noticed that they did not flicker in the wind. Following them, he was amazed to see them climb up to the roof of his relatives' house, remain there a few minutes, and then return the way they had came. Not a single feature was missing from the traditional account.

Needless to say, his uncle's family was filled with consternation. However, they assured him that he had no need to be worried. After all, his family's burial site was not on the island. About midday the following day, his first cousin set out for his farm a few miles away, as he did twice every week. He was a good driver, and he knew the route thoroughly, but half an hour later, he ran off the road, and was killed.

Mr. Corbett was able to authenticate two other cases. Two young ladies were walking home one night, when they met a young male family friend. Having conversed briefly with him, they went on their way, turned a bend in the road and ran into the Island Lights, which then passed them in the direction the young man had taken. That night, shortly after the young man arrived home, his brother died suddenly. Interestingly, the youth had not himself seen the lights, although they felt sure they must have passed him.

Another night, two local men went out to the lake in order to hunt geese, when they saw the lights appear on the island, then cross the causeway, and head off to the northeast, away from the village. Nobody, they were sure, whose family graves were on the island, lived in that direction. But next morning, an oldtimer pointed out that there was an old recluse named John Cavan who would fit the bill. Need I say more? When they arrived at his home, and the police had broken down the locked door, it transpired that the old man had been dead for several days. The lights had been late.