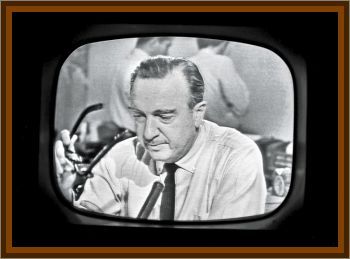 Walter Cronkite was the face of CBS News from 1962 to 1981, when stories ranged from the John F. Kennedy assassination to the Iranian hostage crisis.

Cronkite guessed that the object was about 50'-60' in diameter, a dull grey color and had no visible means of propulsion. As Air Force guards ran toward the UFO with their dogs, the disk hovered about 30' off of the ground.

In the 1950s Cronkite was part of a pool of News Reporters brought out to a small South Pacific island to watch the test of a new Air Force missile. After a short inspection of the new system by the reporters, they were lead to an area that was a safe distance from the launch site. The missile was mounted on a specially built launcher that was attached to a cement base. It was obvious that the area had been quickly built just for the test. The details about the missile were going to be given to the reporters in he form of handout sheets and press releases after the test.

Cronkite mentioned that he and the other reporters had been warned that photography of the missile test and any audio transmissions or recordings by the press were forbidden. They would have to give a written account of the event. Just as the test was ready to proceed, everyone was writing as fast as they could. As Air Force Security personnel walked around the perimeter of the test area with guard dogs and the news reporters watched, the missile was fired up and about to be released. Just then, a large disk type UFO appeared on the scene.

Cronkite guessed that the object was about 50'-60' feet in diameter, a dull grey color and had no visible means of propulsion. Because the noise of activity around him and the missile engine was so loud, he couldn't tell whether the disk made any noise. He did not notice any coming directly from the object.

As Air Force guards ran toward the UFO with their dogs, the disk hovered about 30' off of the ground. It suddenly sent out a blue beam of light which struck the missile, a guard and a dog all at the same time. The missile was frozen in midair about 70' feet from the launcher as it had taken off.

A guard was frozen in mid step and a dog frozen in midair as it had jumped at the disk. Cronkite reminded me that this all happened within the space of about five minutes or less. Suddenly, the missile exploded! After that, the disk vanished. The guard and dog looked alright, but were quickly taken away by medical personnel always present at tests in case anyone became injured. At the same time, guards rapidly ushered the reporters into a concrete observation bunker.

After about thirty minutes of sitting in that hot box, they were brought out into the air again and addressed by an Air Force Colonel.