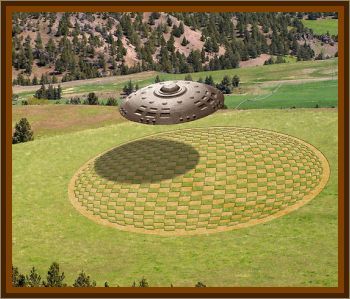 My name is Traian Crisan, I am 48 years of age, a sheep farmer in Arad near the Romanian/ Hungarian border.

On June 20th, I was checking my sheep at approximately 4:00 a.m., when I saw a huge light approaching over a nearby wheat field, like the moon, but much larger. When the light came within 5 metres, a sudden powerful blast of wind blew away my hat and cape and knocked me to the ground. I lay there clinging to a bush in terror.

The bright object was completely round, and it emitted a whistling noise. The object remained motionless hovering above the wheat field for two minutes, before taking off straight upwards and disappearing incredibly quickly. I ran to get help.

When I returned, we observed two crop circles had appeared in the wheat. Both circles measured 9' in diameter, with an outer ring measured 12' in width. All the corn within the circle was firmly pressed down in an anticlockwise direction, and the crop was interwoven, or plaited.

There were several other witnesses who also described seeing a strange light over the field, and hearing a whistling noise! The corn started rippling and then bent over double.