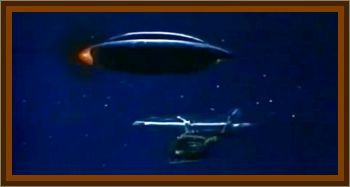 The four man crew of an Army Reserve UH-1H helicopter, based in Cleveland, Ohio, was returning from Columbus, Ohio, at about 10:30 p.m. following regularly scheduled physical examinations. It was a clear, starry night with no moon. They were cruising at 100 MPH at an altitude of 2,500', over a country landscape. Lt. Arrigo Jezzi,was at the controls from the left hand seat. Sgt. John Healey, the flight medic, sat behind him. In the right rear seat was Spec. 5 Robert Yanacek, the crew chief. Commanding the flight from the right front seat was Capt. Lawrence J. Coyne.

About 11:00 p.m. near Mansfield, Ohio, Healey saw a red light off to the left heading south. 3-4 minutes later, Yanacek noticed a single steady red light on the eastern horizon, and reported it to Coyne. About 30 seconds later, Yanacek announced that the light appeared to be converging on the helicopter, and they all watched it warily. As the light continued its approach, Coyne grabbed the controls from Jezzi and began a powered descent of approximately 500 FPM. He made radio contact with Mansfield approach control, requesting information on possible jet traffic. After Mansfield acknowledged their transmission, radio contact was lost on both UHF and VHF.

The red light appeared to be on a collision course, approaching at a speed estimated to be more than 300 MPH Coyne increased the rate of descent to 2,000 FPM until they reached about 1,700', about 600' above the tree tops. With the unknown object about to ram them, the crewmen feared for their lives. Just as a collision appeared imminent, the light suddenly stopped and hovered above and in front of the helicopter. They saw a cigar-shaped, gray metallic appearing, domed object whose apparent size filled the entire windshield.

The object appeared solid, blotting out the stars behind it. It had a red light at the nose, a white light at the tail, and a distinctive green beam emanating from the lower part of the otherwise featureless fuselage. The green beam swung up over the helicopter nose, through the windshield, and into the upper tinted window panels. The cockpit was bathed in intense green light. No noise or turbulence was noted. After a few seconds, the object accelerated and moved off to the west. Coyne and Healey reported that it then made a distinct 45° turn to the right, heading toward Lake Erie. While the object was still visible, Jezzi and Coyne both noted that the altimeter read 3,500' with a rate of climb of 1,000 FPM. Yet the collective was still in the full down position set during the descent. As Coyne cautiously raised the collective, the helicopter continued climbing, as would be expected. At an indicated altitude of 3,800' feet Coyne finally felt that he had regained positive control. Then they felt a slight bump. He descended to the previously assigned cruise altitude of 2,500' and made radio contact with Akron/Canton, which now was easily achieved. The remainder of the flight to Cleveland was routine.

At about 11:00 p.m., Mrs. Erma C. & four children were returning from Mansfield to their rural home southeast of town. As they drove south on Laver Road, they noticed a bright red light flying south. She turned the car eastward and continued on across the Charles Mill Reservoir, a distance of 3.6 miles, covered in about 5 minutes. At this point they saw to the east a red and green light, moving together, coming down rapidly toward them. At first they assumed it was a low flying light plane, but changed their minds almost immediately. The red was too bright, especially compared to the green. They could not see any shape or, at first, hear any sound. When they stopped the car and got out to look, they heard the typical sounds of a helicopter. As they watched, the red light and the helicopter converged.

After the red lighted object stopped, the green light flared up. When we got out, everything was green. I saw that thing and the helicopter. The witnesses agreed that the helicopter was green because of the light from the thing up above, It was so bright that you couldn't see too far. Everything was green. The trees, the car, everything. The helicopter with the other object above and slightly ahead of it moved in tandem from southwest to northeast. Suddenly the green light went out and the object was gone. When the light went out you couldn't see the object. And then the helicopter went northeast. Then we got back in the car and went on,and saw it fly out over the lake. Jeanne Elias, was watching the news at her home southeast of Mansfield just after 11:00 p.m. She recognized the sound of an Army helicopter approaching so loud and near that she feared it was going to crash into the house. The sound persisted for a long time, and when it was over her son John, called out from his room. He had been awakened by the sound, and then had observed a bright green light that lit up the bedroom. The light persisted long enough for him to realize that there must be some kind of object right above the house, because it was coming in so heavy in my room.

The story told by a different crew member reads as follows:

My name is John Healey. At the time of making this officially transcribed statement I was a Detective with the Cleveland Police Department. I was also a U.S. Army reservist training as a flight medic.

The incident occurred when I was traveling on a helicopter with three other reservists, on the evening of October 18, 1973, about 10:30 p.m. We were halfway between Columbus and Cleveland, near Ashland, when the crew chief saw a red light on the horizon. He asked the pilot if there were any towers around there and was told there were not.

As we went along at an altitude of about 3,000', the light seemed to be growing brighter and brighter. It appeared to be on a collision course with us. It kept coming right at us. The pilot had to put our helicopter into a power dive to avoid it.

We were looking right through the windshield watching this thing, and it damn near came to a stop right over us. It just hovered for a while. We all got a very good look at it.

It had a steady red light on its prow. It was cigar shaped. There were no wings on it. It made no noise, created no air turbulence. It had a green light shining down out of aft end. It shone down and on us, and you could see a definite cone shape, the shape of the green light beam.

I've seen aircraft from PT-l9s up to C-5As so I know an aircraft when I see one at night. But this thing scared the living hell right out of me.

We contacted Mansfield Airport and told them we were almost in a collision with an unidentified flying object operating at 3,000' and 600 knots. Mansfield never acknowledged our broadcast.

We tried to get ahold of Cleveland Airport and we couldn't, until the object passed over us. It continued to the West, picked up speed, and we lost it over the horizon.

We never saw it again.

We talked about this sighting all the way back and we just couldn't dope it out. The thing didn't have wings but at 3,000' you have to have wings to stay aloft. It wasn't a dirigible or a zeppelin because those things don't move at the speed this thing moved. Clandestine aircraft wouldn't operate at that speed at that low altitude. All four of us filed official reports.