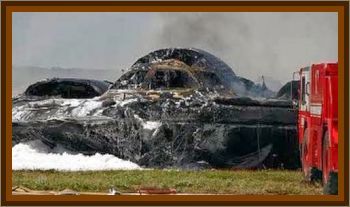 In August 1974 the US Air Defense radar detected a UFO about to cross into American airspace coming up from the Gulf of Mexico. The object was tracked at speeds of up to 2500 mph at an altitude of 75,000'. Continuing on this course the object would enter US airspace over Texas. At first it was thought that the object may be a meteor. However while over Mexico the UFO leveled at 45,000', descended to 20,000', leveling for 5 minutes at each altitude. After tracking the object for about a minute the UFO slowed to 1900 mph and began to descend and turn at the same time. The descent was stepped and not curved as a meteor would have been. Also the speed of the object changed, a meteor would not have changed speed on descent.

On entering Mexican airspace about 40 miles south of Brownsville, Texas, the US continued to track the object until it disappeared from the radar screens close to the town of Coyame, in the state of Chihuahua. Two military radar stations tracked the object while it made its descent. When the UFO disappeared from the radar it was assumed that it had just gone below the radars detection range. No one expected this to be a UFO crash landing. The object failed to return onto the radar screens.

Early the following morning, after the UFO crash, the Mexican authorities started the search for the missing aircraft. At about 10:30 a.m. a report came over the radio that the wreckage of the plane had been found. At about the same time a further report was of made that a second aircraft was on the ground a couple of miles away from the first. This second aircraft was circular in shape, in one piece and only slightly damaged. A few minutes later a radio silence on all search activity was ordered by the Mexican military. Radio intercepts were made by the CIA and by maybe two or three other US agencies, it is thought that the intercepts referred to a UFO crash landing rather than to the civilian aircraft going down.

This has never been confirmed.

A recovery team that included 3 Huey helicopters and one Sea Stallion helicopter was assembled. Such was the speed by the US to assemble the team, it is believed this was not the first time such an incident had taken place. The Mexican government refused requests from the US to allow the recovery team to cross the border to investigate the UFO crash and to assist in the recovery efforts. The Mexican authorities denied the UFO incident, they said they were investigating a plane crash.

By 9:00 p.m. the following day the US recovery team had been assembled at Fort Bliss along with unmarked helicopters, all in a secured area ready to go to the UFO crash site. Recognizance flights earlier that day revealed that the debris had been moved from both the UFO crash site and the aircrafts crash site and loaded onto a flatbed truck. The convoy was seen heading south.

The next day the US had to decide whether or not to send the recovery team in. Later recognizance flights revealed that the convoy had stopped in the desert. With no radio activity, unusual considering the circumstances, a lower altitude recognizance flight was ordered. Recognizance photos taken showed the convoy halted, with truck doors open and two bodies lying in the dirt near the trucks. With this new turn of events the order was given to send in the recovery team. It took the 4 helicopters more than two hours to reach the convoy, what they found would make a lasting impression. When the team arrived at the scene they found that all of the Mexican team were dead. The majority of the bodies were still in the vehicles.

Members of the US team dressed in biochemical protection suits strapped the UFO onto a cable ready to be hoisted away by the Sea Stallion helicopter. They then proceeded to destroy with explosives, all of the convoys vehicles including the bodies and the remaining wreckage of the civilian aircraft. In under an hour the recovery team had recovered the UFO and cleaned up the scene. On returning over the US border the UFO was transferred to a sealed truck for transportation to Atlanta, Georgia. Other reports suggest the UFO was transferred to Wright-Patterson AFB, or possibly an unnamed base. One possible destination may have been Area 51.

The UFO is said to have been a little over 16' in diameter and 5' high. Looking like two upside down saucers joined together. The disk was silver in color with no visible windows or doors. No means of propulsion could be identified. The craft had sustained some damage in the crash, a hole about 1' across, and a dent about 2' across. It is not clear if anything could be seen inside the hole.

What caused the deaths of the Mexican recovery team is not known. The US team seems prepared for this kind of incident. The one thing they did not do is transport the bodies of the Mexican team back to the US. This could have either been because they did not have the equipment with them to launch a full scale chemical recovery operation, or the order of the day was to destroy all evidence. There are no FAA documents relating to the civilian aircraft crash, however this is not surprising if the aircrafts flight plan was not logged to fly into US airspace.