I Looked in Awe & Fascination 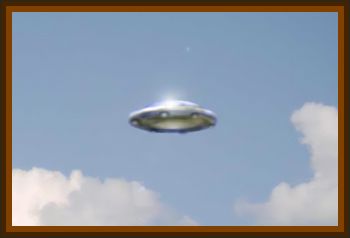 When you have seen a huge disk shaped, silver gray, craft hover motionless while you look it over, your beliefs are shattered in an instant and reality sets in.

Most of the things you were taught are gone as useless information as you stand looking up at the huge craft that according to what you’ve been taught, can’t be hovering over you.

The thing can’t even fly. Yet there it is. You’re not scared of it, you’re fascinated by it.

There are portholes and lights around the craft and the sounds it made as it approached have stopped and there’s only a high pitched hum.

There’s a strange feeling coming over you like that some how you are drawn to whoever is inside the thing. It starts moving back on a 45° angle to the path it came in on, and as it does it starts to rise.

Then it moves upward with increditable speed and no change in sound. As the lights disappear you feel like you have just lost your best friend.

You look at your brother who is about 20' from you and 2 years younger. You both run to the house to tell your dad what you have just seen. He dismisses it as so much garbage because he’s a Baptist preacher and that blows his religious theories all to hell.

I see it now in my mind the same as I did at that time 57 years ago. That made me a knower. Not a believer. There is a big difference.

It changed my life in ways that’s hard to explain. I lost all faith in anything the government said or ever will say, and I also lost my religion.

Probably the best thing that ever happened to me, since that time I've seen another object here in the Smoky Mountains of East Tennessee. It scared the Hell out of me and I have never talked about it much.