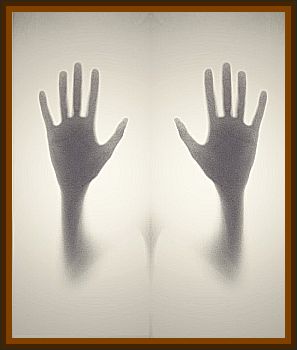 A woman walking on a road along the steep banks of the River Loire suddenly found herself within a brilliant, blinding light, and she 2 huge black hands appear in front of her. Each one had 5 fingers, of a black color with a yellowish tint, somewhat like copper.

These hands did not come from behind her, but from above, as if they had been hanging over her head waiting for the proper time to catch her. The black hands did not immediately apply themselves to her head. She probably took 2 or 3 steps before they touched her. The hands had no visible arms. The 2 black hands were applied to her face with violence and squeezed her head, as a bird of prey rushes on its unfortunate helpless victim.

They pulled her head back against a very hard chest, one that seemed to be made of iron, she felt cold through her hair and behind her neck, but no contact with clothes. The hands were squeezing her head like a formidable vice, not abruptly, but gradually.

They were very cold, and their touch made her think that they were not made of flesh. The large fingers were placed on her eyes, and she could not see anymore, on her nose so that she could not breathe, and also on her mouth, to prevent her from crying out. When she was surrounded by the strong, blinding light, she had the feeling she had been paralyzed, and when the hands touched her, she had the very distinct impression of a strong electric discharge, as if a lighting bolt had shaken her. Her whole body was annihilated, helpless, without reflexes. For a little over a minute, she felt his hands tightening very strongly on either side of her throat. It was horribly painful.

Then he began to swing her forward and backward several times, still fiercely squeezing her head against his chest. She had the distinct impression that this being wore armor or a steel carapace, or some very hard and cold material. She felt his 2 invisible arms pressing heavily on her shoulders. It was at that moment that she heard his laugh, a strange laugh, she could not explain, it was as if she heard him through some water, and yet it seemed quite close, above her head.

At first it sounded rough and hushed, then rather strong and rolling. It made her shudder and hurt her. After a few seconds the laugh stopped, suddenly cut off. Then a knee hit her on her back, hurting her very much, as if it were made of steel.

This blow made her fall back, and the unknown aggressor made her lie down, still squeezing her head against his chest. The he dragged her along the path, by her head, and he seemed in a great hurry. She did not hear him breathe. He pulled her into a brush filled with brambles and nettles and acacias, still going backward at an incredible speed, holding her head.

At this moment she heard his voice above her, and it said:

There she is. We’ve got her.

As if he were talking to someone else, some accomplice who had stayed inside the bush, this voice, like the laugh, seemed close by, although hushed by some obstacle, and it was short, rough, sharply cut,possibly in French.

She was choking and felt she was going to die, her whole life passed before her in a few seconds. Her aggressor pulled her through the bushes until they reached a small pasture, and he stopped. His hands had gradually slipped down her face, and she tried to call for help but she had no voice left but a tiny, shrill cry. After a while she was able to sit among the brambles. She had a very hard time breathing. Her bag was still in her hand, with the money it contained. At last she was able to get up in spite of her weakness and then she heard some noise to her left inside the bushes.

She thought she was going to see her aggressors and recognize their faces, but she saw nothing. Only the branches moved, waving in the air, she saw and heard the brambles scratching the empty space, and the grass being pressed as if under the steps of some invisible being. She was terrified, softly then took to the path again, walking with difficulty. Her legs were lacerated and bleeding. She felt a strange sensation of nervous exhaustion, indefinable, as if a strong current had electrified her. In her mouth was a sickening, metallic, bitter taste, her muscles did not obey her. Over her shoulders she felt something like a bar, and in her back a painful heat, as if she had been exposed to flames or to a burning ray. She must have walked like that for 5 or 6 minutes.

At the end of the path there was a turn and from there she could see houses, and then the pains ceased a little bit. Everything had lasted 15 or 20 minutes. Abruptly she heard a great noise, like a violent wind during a storm, a sudden displacement of warm air or a violent whirlwind. She saw the trees bending as if under a sudden storm, and she was nearly thrown down.

Almost simultaneously there was a strong, blinding white light. She had the feeling that something flew through the air very fast but she saw nothing. Soon everything became calm again. She felt discomfort and nausea.

Later investigation revealed that in some places the brush was black and scorched, at some other places it was pressed and flattened. The fences in the pasture, which were made of wooden posts and barbed wire, had suffered also. Some posts were burned, others pulled out, and the barbed wire had been wrenched away and broken.

The previous evening the witness in this case had observed a kind of shooting star, which stopped abruptly, then appeared to go up and stay among the other stars for a while, then it grew bigger and took on a kind of swinging motion, its light alternately on and off.