Craft Appeared As Waiting To Be Inspected 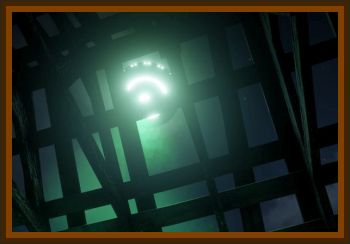 While driving the company’s 18 wheeler on I-29 just North of Council Bluffs, Iowa, I saw something through the top right of the windshield that looked like an airliner, but too many lights, banking then dropping down about 1 mile out.

When I looked back to the road briefly, I almost couldn’t find it again but saw it hug the ground and cross to the interstate beyond the next overpass.

When I drove around a mild curve and went under the overpass, it was ahead of me about ¼ mile over the ditch moving northbound as I was. I left my truck on a cruise at 60 mph.

It only took a few seconds to catch up to it. It slowly picked up speed as I got nearer and when I was just up to the rear lights, It was traveling about 2 mph slower than my 60 mph, so I studied the craft the best I could.

The bottom of the craft was only about 20' to 25' above the road surface to my right and the leftmost white light, 1 of 3, was just to the right of the truck cab. What I could see clearly were three brilliant white circular disk shaped lights about 4' in diameter forming an equilateral triangle about 4' to 6' apart 2 leading and 1 trailing center. A single bright red circular disk of lights approximate 3' in diameter located in the center of the 3 white lights.

When approaching from the rear, I leaned forward to look up behind the lights, but couldn’t see anything but black and a faint smoky or black misty wake like a boat would leave in water. It looked like it could have been following the underside of the craft, but I really couldn’t tell.

The white lights were brilliant and looked like a hundred plus bulbs in a disk, but were too bright to see the light source, but they did not blind the eye when looking right at them. The light they gave off had a flood like appearance and lit the ground and the truck cab very well, about like halogen. The red disk of light was bright red but did not glare as much and I could see what appeared to be maybe 30 or more bulbs. The actual count could be higher.

The craft continued to fall behind at the 2 mph rate until it was well behind the trailer then slowed considerably as I continued at 60 mph. When a mild hill and then another overpass came, I could still see the brilliant white light glowing upward in my mirror even though I was possibly a mile or so away and over the hill.

That was Tuesday, and I wasn’t routed that way all the rest of that week. The following Sunday, I drove down there to investigate the area during daylight. The ditch in that area extends approximately 50' over to a row of utility poles that are about 35' to 40' in height all along the area this occurred. Since all during the event, I could not see the size or shape of the craft, this may help in some way.

Also, I didn’t get the precise locations of these, however, I noticed there are a few lines coming from the utility poles and crossing I-29 at various points and appear to be elevated only about ⅔ the way up these poles. Maybe that explains why the craft backed off when it did.

I think it might have had to stay below the radar or something. When I first saw it bank & drop, it went over to I-29 almost hugging the ground and I think it may have dropped where Loess Hills protrudes upwards just East of the interstate.

Also, I forgot to mention the craft moved along like it was on rails, not even a wobble or bump, nor did it have an angle of attack, it was perfectly level. I couldn’t roll down the right window, it isn’t powered and it isn’t safe to reach that far, but I had on an empty trailer and was on fairly flat ground and the motor wasn’t really noisy, and I did not hear any noise from the craft over the moderate motor and tire noise of the truck.