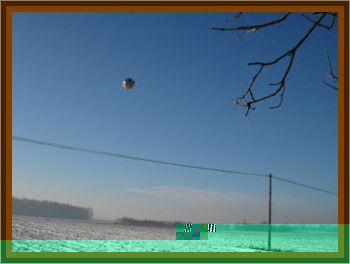 Three of us were living in a house while attending college. This was told to two of us by the person who witnessed the event. He was a mechanical engineering major, an honor student, and quite sober minded. He never drank or used drugs. He passed away two years ago.

He had returned after the Thanksgiving holidays. He spent the holidays hunting on a large lease located between San Antonio & Laredo. Deer hunting stops in Texas 30 minutes after dusk, I believe.

He left his blind and walked to the gravel road to wait for his dad to pick him up. He saw a single light, quite a distance down the road and figured his dad had broken a headlight driving through the brush. This was a huge ranch covered with brush and prickly pear & numerous inside cross fences. As it neared, he realized it was too high to be a light from pick-up truck. As it kept coming up the long hill, following the road, he realized it was too orange, and too large.

He steps behind a clump of brush and watches. The light gets to a cross fence and cattle guard, stops a few seconds and makes a 90° turn and follows the fence line. It is about a foot above the fence or 6' above the ground. The size is about 3 or 4 inches larger, in diameter, than a basketball. There is no wind. The object makes no sound.

He said it was moving about the speed of a man jogging, and was quite baffled by what he saw. The orange was from an inner glow that stayed the same intensity.

In 2000, a co-worker and I were driving from Ft. Worth to Houston. The news station we were listening to reported a UFO sighting. After a few questions, he told me of an experience he and his cousin had while deer hunting in the lower Rio Grande Valley. The year was in the early 1970s. His cousin flew helicopters in Viet Nam, My co-worker worked on B-52s in SE Asia, a rancher had allowed these two returning veterans to hunt on his property.

He suggested a huge mesquite tree on a pipeline easement. One hunter looked one direction, the other watched the other. Near dusk, my friend noticed a light coming toward them. He called it to the attention of his cousin.

Here comes a chopper checking the pipeline. They usually fly the lines every week. His cousin waited a minute or so and said: That's not a chopper.

Eventually the sphere got to the tree they were in and stopped for a minute or two. Then it heads on down the pipe line easement.

The description was exactly the same as what my college roommate saw 7-9 years earlier and about 200 miles to the northwest.

I said: I've heard this story before.

He said: No way! I've never told anyone, including my wife.

Then I told him of my roommate. I myself am 71 years old and have never seen anything. I have majors in chemistry, biology, biochemistry & marketing. I have minors in math and physics. I know these guys saw something they cannot explain.