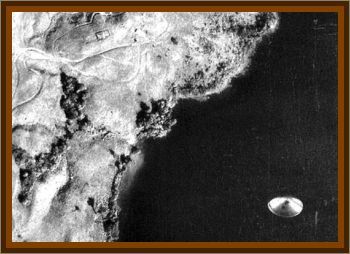 The photo above was taken by a Costa Rican government mapping plane during an aerial mapping mission. This UFO photograph is unique for several reasons.

1.) The photograph was taken by a high-quality, professional camera.

2.) The unidentified object is plainly visible against the uniformly dark background of the lake and appears in sharp focus.

3.) The camera was aimed downward and the plane was flying at a known, fixed altitude 10,000', which makes it easy to calculate a maximum size for the object 683'.

The plane carried a crew of four, a specialist in aerial photography, a geographer, a topographer, and the pilot. No member of the crew stated that they saw anything unusual during the routine flight. Much analysis has been done using the original negative, It seems safe to assume that it is not a double-exposure or the result of manipulation of the negative. All indications are that this is a photo of a large three dimensional disk , or shallow cone, above, or possibly partially submerged in Lago de Cote. There were apparently no witnesses to the disk's presence at the time of the photograph, but other incidents at that location had been reported by local farmers, involving strange, artificial objects moving around the surface or just below the surface of the lake.