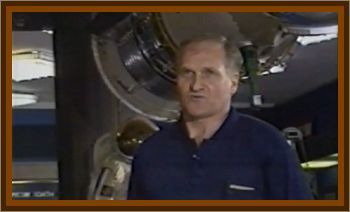 Cosmonaut Victor Afanasyev lifted off from Star City to dock with the Soviet Solyut 6 space station. But while enroute, something strange happened. Cosmonaut Afanasyev saw an unidentified object turn toward his craft and begin tailing it through space.

It followed us during half of our orbit. We observed it on the light side, and when we entered the shadow side, it disappeared completely. It was an engineering structure, made from some type of metal, approximately 130' long with inner hulls. The object was narrow here and wider here, and inside there were openings. Some places had projections like small wings. The object stayed very close to us. We photographed it, and our photos showed it to be 75' to 90' away, said Afanasyev.

In addition to photographing the UFO, Afanasyev continually reported back to Mission Control about the crafts size, shape & position. When the cosmonaut returned to earth he was debriefed and told never to reveal what he knew, cameras & film confiscated. The photos and his voice transmissions from space have never been released.