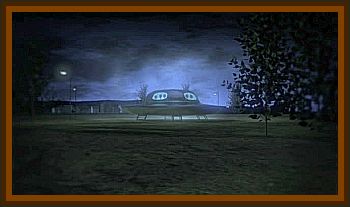 In 1995, the Royal Air Force facility at Cosford, near Wolverhampton, is probably known for its huge museum which is home to an impressive collection of vintage military and civil aircraft. More than 30 years ago, however, Cosford became briefly famous for an entirely different reason.

At around 11:30 p.m. on the evening of December 10, 1963, a dome shaped UFO touched down on the base, bathed the surrounding area in a beam of green light, and was seen at close quarters by at least 2 RAF apprentices. At least, that has been the accepted story for the last 3 decades.

In accordance with the British Government’s 30 year ruling the Ministry of Defence’s 80 page file on the case has recently been declassified and is now available for inspection at the Public Record Office. Its contents make for interesting reading.

Rumors that something extraordinary had occurred at the base surfaced almost immediately, but it was not until early January 1964 that matters escalated. On January 9, Wilfred Daniels, a UFO investigator from Stafford, had the opportunity to speak with Reverend B.G. Henry, the Chaplain at RAF Cosford, and duly put to him a number of questions relative to the alleged close encounter.

We cannot be sure what was actually said during the course of their brief conversation, both men recalled their chat in markedly different ways, but a controversy was created which raged for months.

Flight Lieutenant Henry said that publication of his name would cause him trouble, that it was more than his job was worth to arrange a meeting between me and the 2 RAF apprentices, that he really ought not to be talking to me about it at all, that security had dropped right down on the whole thing.

For his part, Reverend Henry’s recollection were somewhat opposed to those of Daniels.

A letter from Flying Officer R.A. Roberts at Cosford, to the Air Ministry at Whitehall, stated that Flight Lieutenant Henry categorically denies all statements attributed to him. Flying Officer Roberts further added that the chaplain was seriously considering taking legal action.

To his credit, Waverney Girvan resolved to get to the bottom of the mystery, and fired off a barrage of letters to both Cosford and the Air Ministry. As Girvan pointed out to the staff at Cosford, several contradictory explanations had been offered by the authorities to explain the encounter:

Nothing at all, 2 drunk apprentices, a hoax, and, somewhat amusingly, a British Railways steam train were the various theories mooted by the Air Ministry in its attempts to squelch interest in the case. Smelling a rat, Girvan gave the incident pride of place in the next issue of Flying Saucer Review, and wrote a lengthy article on the case in the Kensington News and West London Times.

Commenting on the Government’s self contradictory explanations, Girvan said:

What is it that the Air Ministry is trying so desperately to hide?

The Express and Star of Wolverhampton, in spite of seeking the Station’s views, reported the boys’ claim., grumbled the Ministry in an internal memorandum of March 12, 1964.

By May of that same year, the controversy had begun to die down and normality returned to RAF Cosford. The pro UFO facrtions continued to champion the case, while the Air Ministry was more than happy to play the matter down.

So, what exactly did happen on that long gone winter’s evening in December 1963?

On the plus side, Waverney Girvan was a much respected individual, well known for his diligent researches. In addition, Wilfred Daniels had served in the military at the level of Captain, an equally credible source.

Moreover, it is a proven fact that the Air Ministry did offer a variety of contradictory explanations in its attempt to dismiss the case.

On the other hand, the negative aspects of the case have to be addressed. Flight Lieutenant Henry was adamant that he had been misquoted by Wilfred Daniels, the possibility of him taking legal action was discussed in interdepartmental memos. Furthermore, a handwritten note which originated with the Air Ministry stated that with respect to the 2 apprentices who reported seeing the UFO:

I believe the 2 boys in question wanted to get out of the survive, and we should not have been sorry to see them go.

However, if nothing untoward occurred, why did the Air Ministry feel the need to offer a variety of ever changing explanations as it sought to diffuse both public and media interest in the event?

In the final analysis, whatever truth lies behind the alleged 1963 UFO encounter at RAF Cosford, of only one thing we can be truly certain: with the release of the Government’s 80 page file on the incident, the decades old controversy looks certain to resurface.