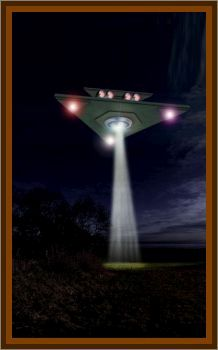 During the last two days of March 1993 there was a mass UFO sighting in the United Kingdom that has become known as the Cosford Incident or the British UFO Mystery. The first sighting took place in Somerset at approximately 8:30 p.m. on March 30th followed by another sighting in Quantock Hills at 9:00 p.m. For the next two days hundreds of reports poured into local police stations and the MoD. Many of the reports were filed by police officers and military personnel.

It has been confirmed that many more people in all walks of life, police, military and the public saw the UFO but made no attempt to report it to the authorities. The vast majority of the reports described a triangular shaped craft with white lights at each point. Many of the reports included people that had seen the UFO at very close range, within 200' to 400' from the ground. One of the most intriguing reports came from a family in Straffordshire who saw the object so low that at one point they thought it had landed in a field. They described the UFO as triangular or diamond shaped.

They immediately gave chase in their car to the suspected landing sight but had no luck in finding the object. They did describe a low humming sound, a very low frequency sound. They said you didn’t just hear the sound you actually felt it, like standing in front of a bass speaker. No one is sure if there is any significance to the fact that this mass sighting happened three years to the day of the famous mass sighting termed the Belgium Wave, which had more than 1000 witnesses from virtually every walk of life.

The UFO proceeded to fly over two military bases, RAF Cosford and RAF Shawbury, it was seen by at least three people on guard patrol at Cosford. These individuals immediately filed reports which is standard procedure for anything unusual in the air over any military base. They checked radar, there was nothing scheduled to fly that night over or near the bases, not military or civilian aircraft, the radar returns were all negative. A detailed investigation was launched into the the potential radar findings and oddly enough one of the primary radars heads was either intentionally disabled or had been disable prior to the UFO incident, rendering any potential radar information inconclusive.

They phoned RAF Shawbury approximately 12 miles away from Cosford. The base meteorologist took their call, he was a man with about 8 years experience and had been looking into the night sky preparing for the next days weather report. To his absolute amazement he began to see a solid object in the sky that he described as a craft of more than 200' long.

He further described it as being midway between a Hercules C-130 Military Transport plane and a 747 flying directly over the RAF Shawbury. He also described the low hum. For all intents and purposes the meteorologist acted as an independent expert witness that verified both the craft and the sound.

One of the most intriguing aspects of the meteorologist report is that he claimed that the craft was putting out a beam of light directed at a field just beyond the perimeter of the base fence. The light was tracking back and forth in a sweeping motion as if it were attempting to find or detect something on the ground.

After sometime the beam of light retracted and the craft moved off. It was estimated that the craft was moving no more than 20 to 40 mph. Eventually the craft shot off at a very high mach acceleration in a split second.