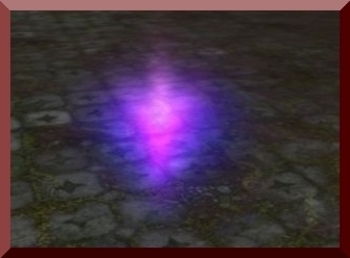 The Legend of Corpse Candles

My friend, Miss Morris, lived when she was a young girl in Wales, and her father's house stood on a steep hill side, with the village church just below, a short walk from the lodge gates.

One Sunday evening, in winter, Miss Morris, her sister, and two maids walked down to the church to attend the 6 o'clock service. As they came out from the drive on to the road, they saw flickering down the hill in front of them, a pale bluish light, which, in the darkness Miss Morris and her sister took to be a lantern carried by some churchgoer like themselves, although they could see no figure of man or woman.

The light stopped at the churchyard gate, and turned in, but Miss Morris observed that the person carrying it did not enter the church, but went on towards a grave with a tombstone. Now this grave happened to be the only one in the burying ground, for the church had only lately been built, and the churchyard but newly consecrated. Arrived at the solitary tombstone, the light suddenly disappeared.

The two girls went round to the same place, as their curiosity was roused by the light's disappearance, but there was nobody by the grave. Rather puzzled, they went into the church, where they had to wait some time for the service to begin, as the Vicar was very late.

Afterwards he told Miss Morris that he had been detained at a cottage by a dying woman, who had begged him to stay with her till the end. When they returned home, the sisters told their mother of the light they had seen, and were promptly advised by her to speak to no one else on the subject, and to dismiss it from their minds as soon as possible.

However, next day, as Miss Morris was passing the churchyard gate, she saw a brother of the deceased woman standing there with the Vicar, to whom he said: ‘My sister wished to be buried by the side of her friend, Sarah Jones.' And the man then walked through the churchyard, straight to the exact place by the tombstone where Miss Morris and her sister had seen the light disappear on the evening before.