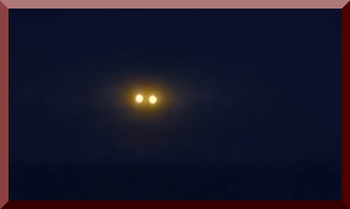 I was an enlisted Naval Aircrewman. Although my knowledge wasn’t as in-depth as a pilot’s, it was better than average. My sighting came shortly after I got out of the Navy, but it was seen over Naval Air Station North Island, where I had been stationed.

I was with a friend of mine one night in 1987, he was also a Naval Air crewman who later became a Navy helicopter pilot, and we were in Coronado, so we were at the eastern end of the base.

We noticed what looked like an aircraft landing light roughly off to the northwest, approaching the field. We both recognized that it was coming from an odd direction, not like normal air traffic. It was slightly yellowish, like a tungsten light might be.

It was moving towards us very slowly, VERY slowly - too slow to be a fixed-wing aircraft, but NAS North Island is and was home to a lot of helicopters, so the speed wasn’t necessarily odd. The fact that it was moving slowly and not really changing course or altitude was a bit odd, it was just passing over the airfield.

It got closer to us and we noticed a few odd things. One is that it made absolutely no noise at all, and the other is that the light would sometimes flicker and even go out for a second or so.

I seem to recall that it circled around once, but I may be wrong about that. I do know that as it got closer we could see that the light was illuminating something above it, just barely, and whatever that was, was gyrating slowly.

It then continued on past us, so it took an approximate southeast course over the base. There didn’t seem to be any reaction from the Navy. My friend was still active duty and didn’t hear anything about it.

Up until literally a few minutes ago, there was only one thing I could think of that it might have been, a homemade hot air balloon. But, as I was typing this up I began to wonder, could it have been a parachute flare? My conclusion is that almost certainly was not a parachute flare. A - It didn’t descend. B- There was no smoke. C - It burned far too long to be a flare. D. - It wasn’t bright enough to be a flare. And maybe E - I assume a flare would give off a hissing noise and this didn’t.

So my conclusion is that it was either a homemade hot air balloon or a spacecraft from another galaxy.