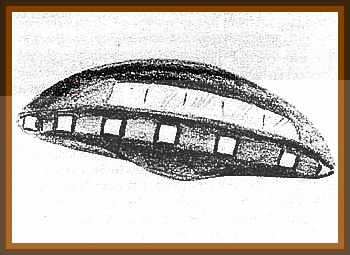 I went outside to see what my son was pointing at, I saw the silver object hovering above the house at 1200'.

The object was oval in shape, it had no wings and did not make any noise. Its color was silver. When it moved it moved very slowly and vanished behind the mountains.

This happened around 7:30 a.m. My son was getting ready for school at the time when he drew my attention to the object looking out the window. I then went outside to have a closer look and I believed what I seen. It was not a weather balloon or a satellite cause the object was too close to be either one.

Neither was it an airplane or a helicopter, if it was it would have made a loud noise from having engines.

This object was very quiet when it moved.