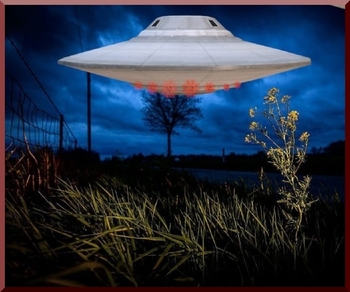 At approximately 7:30 p.m., David Bates - 7, Steven Stillie - 9. and Henry Stillie - 7, were playing along the banks of the Coquitlam River, when they saw a craft shaped like an inverted dish which landed in a gravelled area some 200'north of the Canadian Pacific Rail Bridge over the river. They reported the incident to their parents and to a neighbor, Mrs. Lola Rogers, who investigated the area the following morning and found two strange black circles on the gravel.

The boys said that the object first flew over the river at 7:30, then stopped, reversed course and began descending into the clearing beside the river. The boys watched from a vantage point approximately 150' from the site. They said the craft had markings, made a buzzing sound as it descended, and gave off a blast of hot air as it touched down.

All three described the object as dishshaped with a squarish protuberance on top with what looked like a door in it, and lights which seemed to change from red to green to white. Mrs. Rogers stated that she had walked through the area several times prior to the sighting and the black spots were not present then.

The boys did not observe the object's departure as they were frightened and ran into the house. They guessed that the viewing time, from the time that they first sighted the object coming across the river until they left the scene, was about ten minutes.

After questioning the boys, the investigator noted that the only area of disagreement between the boys was in reference to a flashing light on top of the object. The Stillie boys thought that the light was a red flashing light, whereas the Bates boy thought the light changed colors.

David Bates also stated that there was a row of lights around the aperture which they took to be an exhaust hole on the bottom, whereas the Stillie boys said it looked like a bright chain.

Mr. and Mrs. Stillie said that when the boys came running home they were very frightened, exhibiting glazed eyes and pale skin as they related their experience.

Mrs. Rogers, who accompanied the boys to the site the next morning, said that there was a nauseating odor of burned material much like the smell of ashes from a fireplace. She said she picked up a rock in this black spot and it stained her hand and took a week of daily scrubbing before it came off. She admitted that she had not believed the boys' story until she visited the site, but was willing to admit that the boys had never pulled any pranks before.

The investigator did not learn about this incident until a month after it had allegedly occurred and, upon digging down into the large 5' 6" spot, found that the black residue lay about 4" below the surface, and felt that the surface residue had been washed below the surface by rain. This was unfortunate, for it is felt that earlier examination of the material might have revealed something. However, examination of the material merely indicated that the rock and gravel had been subjected to great heat.