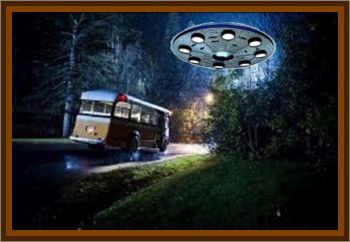 It was on a bus trip from Santiago to North Serenas Chile it was a dark night, I was talking with the bus driver and at nice full stars sky, I saw an object that lit the far horizon, it was spontaneous it flashed a soft light orange/yellow.

I ask the bus driver if it was normal for him, he stated he saw alot of these strange lights.

The bus was running and after a minute stalled, the bus was full of people that were sleeping.

I was scared, the bus was still stalled for more than a minute after that the object up and down, then north and flew away.

Later the bus driver make contact, started talking, and the engine started and we went to La Serena. I was 9 year old, the bus driver almost 50 and for him it was a experience that was not new to him, but it was for me.

A special experience to see same object how flow at night with soft lights and than disappear in the sky.