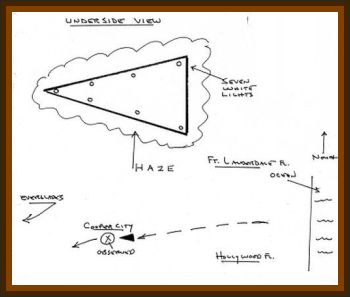 My wife and I observed a very large, dark triangle, arrowhead shaped, flying low from East to West. It was completely silent.

We counted 7 circular white lights on the underside. The triangle craft was moving at a high rate of speed, surrounded by a white haze.

The lights on the underside were not flashing or pulsating. The craft was darker than the night sky. It appeared to be heading from East to southwest from the ocean, from Fort Lauderdale area towards the Everglades.

The altitude appeared to be no more than a mile. What impressed us both was the speed, shape, lights, haze, and silence of this craft. It was observed from our back yard at night.

Prior to contacting you, I watched the Peter Jennings Special on television. My reason for contacting was to learn if others had observed the craft similar to the one my wife and I observed in 1989.

After all these years, I really desire an answer as to the question of were we the only persons to observe this type of unidentified craft.

One evening in 1989, month not remembered, my wife and I were sitting in our open back yard patio hoping to observe the fire trail of a launching at Cape Kennedy, which could be visible unobstructed, as we reside on a lake. For reasons unknown, we did not see the flame tail and were returning to the house. Then, my wife became very excited and pointed towards the eastern sky.

Approaching us East to West from the ocean/Fort Lauderdale area, was a strange flying vehicle. It was moving very quickly at a low altitude and turning southwest directly towards our home. We both observed a very large triangle, or arrowhead shaped craft, surrounded by a haze at approximately ¾ of a mile, altitude.

As it passed above us, it made no sound. It was completely silent. Clearly visible were circular white lights, 7 in number, on the underside, beginning at the nose, and evenly spaced towards the rear. It disappeared from view, going towards the Everglades.

I build model aircraft as a hobby, and this vehicle was not shaped like anything I have ever seen, including the stealth F-117, or the B2 Bomber.

My wife and I mentioned this incident to several of our friends and neighbors immediately, however, they expressed no interest. We did not contact any official agency for obvious reasons. I hope that this information will be useful.