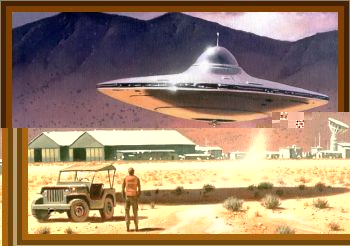 Cooper was one of an elite band of test pilots at Edwards Air Force Base in California, in charge of several advanced projects, including the installation of a precision landing system.

I had a camera crew filming the installation when they spotted a saucer. They filmed it as it flew overhead, then hovered, extended three legs as landing gear, and slowly came down to land on a dry lake bed.

These guys were all pro cameramen, so the picture quality was very good.

The camera crew managed to get within 20 or 30 yards of it, filming all the time. It was a classic saucer, shiny silver and smooth, about 30' across. It was pretty clear it was an alien craft.

As they approached closer it took off.

When his camera crew handed over the film, Cooper followed standard procedure and contacted Washington to report the UFO, and all heck broke loose, he said.

After a while a high ranking officer said when the film was developed I was to put it in a pouch and send it to Washington.

He didn’t say anything about me not looking at the film. That’s what I did when it came back from the lab, and it was all there just like the camera crew reported.

But the film was never found, supposedly. Blue Book was strictly a cover up anyway.

Cooper revealed he’s convinced an alien craft crashed at Roswell, NM., in 1947 and aliens were discovered in the wreckage.

I had a good friend at Roswell, a fellow officer. He had to be careful about what he said. But it sure wasn’t a weather balloon, like the Air Force cover story. He made it clear to me what crashed was a craft of alien origin, and members of the crew were recovered.

Why has the government kept its UFO secrets for so many years?

It started in World War II, when the government didn’t want people to know about UFO reports in case they panicked, said Cooper. They would have been fearful it was superior enemy technology that we had no defense against.

Then it got worse in the Cold War for the same reason.

So they told one untruth, they had to tell another to cover that one, then another, then another...it just snowballed.

And right now I’m convinced a lot of very embarrassed government officials are sitting there in Washington trying to figure a way to bring the truth out. They know it’s got to come out one day, and I’m sure it will.