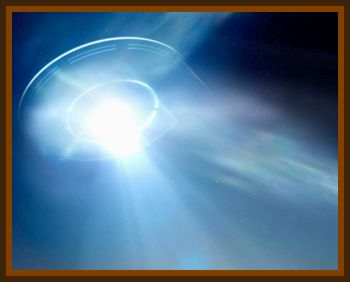 The events that rapidly accrue during this investigation would change their lives forever. Officer Spaur gets out of his car, Deputy Neff will remain in his.

Instantly, above them in the sky, they begin to hear a strange sort of humming noise and see a gigantic object with bright lights above them.

This sighting would engage them in an 86 mile chase through Ohio clear into Beaver County, PA.

Deputy sheriff Spaur instantly got back into his car and radioed dispatch of his sighting, officer Neff did the same. They began in pursuit as the object in the sky commenced flying away, utter chaos and excitement soon followed chases that would engage them into speeds in excess of 100 mph. To be certain, this was an experience neither officer had ever experienced, or their training had prepared them for.

As he radioed this strange event in, Officer Spaur was instructed, strangely, to shoot at it. As both deputies were in pursuit of this unknown spacecraft, both accounts by officers claimed they witnessed the strange ship performing extraordinary maneuvering capabilities, unlike anything both had ever witnessed before.

Meanwhile, in Mantua, OH, Chief Gerald Buchert was listening in utter fascination to the calls on the radio about this mysterious pursuit that was now involving more officers in the chase as it continued, and as the dialogue over the police radios aggrandized. He decided to drive home, rather quickly, to obtain his camera and snap some photos of what he, himself, saw in the sky.

I do not know if these photos were ever published, confiscated by the U.S. Government, or lost. No one, it seems, has talked about them or seen them.

As he became involved in pursuit of the spacecraft, he continued, he claims, somehow, to snap photos while driving at high speeds. In any event, as the band of officers approached Rochester, PA, the chase slowed, and the squad cars got tangled in a mess of bridges.

At least according to one police officer’s account, when the men reassembled themselves for a continuance of the chase, the spacecraft just stood in the sky, as if waiting for them to begin, throughout the entire affair, the ship stayed well above, in the sky, and ahead of them, but not enough for it to completely vanish out of sight, as if it was taunting further in pursuit.

By now, the police vehicles were low on gas and driving out of Rochester into another town called Conway in PA. This is where the eyewitness accounts are heightened. Pulling into a local gas station, officer Spaur and Neff were greeted by local patrolman Frank Panzanella who was also a credible witness to the mysterious goings on the sky above him. Just as these officers were discussing what they saw, fighter jets were already in hot pursuit after the spacecraft, all 3 officers ran back into their cars and continued the chase for a short time until the secret spacecraft just suddenly vanished out of sight. That was the end of all.

The police officers involved in the case were not the only eyewitnesses to this amazing event. Hundreds of people in Beaver County and Ohio were calling their local police stations and reporting strange sightings that they spotted in the sky above them. It defied any explanation, and no one came forward with any real information. The strange humming sounds and shiny white lights were a considerable topic of discussion for all of the townsfolk who were witnesses. It didn’t take long, it seemed, for a Government official to get involved. This official to get things explained and to interview witnesses:

Enter Major Hector Quintanilla, United States Air Force, director of Project Blue Book. For those who are unfamiliar, Project Blue Book was a government funding project whose purpose was to investigate UFO sightings. There are currently over 74,000 pages of documents on UFO sightings housed in the National Archives from this project.

Major Quintanilla interviewed both officers Spaur and Neff and confidently concluded that what they were chasing was a satellite, over time, Major Quintanilla even changed his story and claimed that what they were really chasing was the planet Venus? As for Officer Buchart’s photos? Quintanilla was unimpressed; he claimed they were too vague and not focused to produce a convincing image of anything. That is actually a credible response considering he was attempting to drive and photograph this object simultaneously, which probably explains why the photographs have never surfaced after all these years, have they?

As for the jet fighters in pursuit? Quintanilla claims no orders were ever given to dispel jet fighters in the area, despite dozens of eyewitness accounts that claim to have seen them.

Officer Spaur never backed down his claims, however, it seems the officers involved with this incident changed their stories over time. For some reason never fully explained, Officer Spaur resigned his commission at the police department and got divorced from his wife, purportedly over his obsession of what he saw. It is reported that he moved west and has not been seen in this area since, it is known information that he passed away, I believe, in 1985.

Over the years, hundreds of sightings continued around the greater Pittsburgh area. Another famous one, which a lot of folks believe in connected with this incident is the famous Kecksburg UFO Incident that happened a year earlier, Kecksburg is an unincorporated community in Westmoreland County, PA. This is a case where the late Dr. J. Allen Hynek, the father of Ufology, was involved, it became world famous.

In other news of this incident, because of its USAF involvement and recorded into Project Blue Book, the famous director, it is said, Steven Spielberg read the report on this UFO and was impressed with all of the chasing that it made mention of, it was said he later used it as inspiration for the famous chase in his move, Close Encounters of the Third Kind. In any event, this incident is hardly made mention of, and no one seems to remember it. To close this off, I have inserted some actual eyewitness testimony from various people who were involved with the unexplained happenings of that day. I present the following:

1. The attached statements are submitted as requested 16 May 66.

2. Mr. William Aber does not wish his signature associated with his statement.

3. Patrolman Frank Panzanella will assist in any way he can. However, he stated emphatically, he does not wish involvement in any way with the news media.

4. Mr. Wayne Huston, formerly Patrolman Wayne Huston does not wish his name identified with his statement. He has been harrassed by news media and private organizations also individuals. He has been misquoted by news media and is constantly bothered by telephone calls. Possibly the above mentioned may have been a deciding factor Mr.Huston resigned his position with the police force and accepted employment in another area.

4. All 3 individuals contacted were very cooperative. However, Patrolman Pansanella and Mr. Huston are strongly opposed to the news media and their misinterpretation of the incident.

FOR THE COMMANDER EUGENE F. REHRER