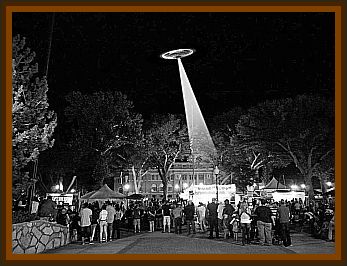 Larry Riordan, the Superintendent of Security for the X-10 control zone, while driving to a residential area saw an object which he thought at first was a balloon which had lost its basket. It was generally round, appeared to come together at the bottom in wrinkles, rather indistinct, and something was hanging below.

It appeared to be 8' to 10' long and lead or gunmetal colored. It didn’t seem to be moving but, since he was traveling and only saw it for a number of seconds, he couldn’t be sure. He was sure it wasn’t a weather balloon, although he thought it might have been a gas bag balloon launched by the nearby University of Tennessee Agricultural Research Farm.