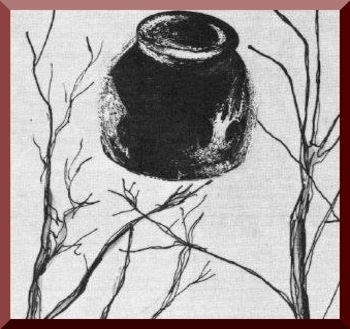 14 year old Reed Thompson of Milan had got home from school on the 19th of January, and was sitting in the Thompson living room watching TV at about 3:00 p.m. His back was to the large ceiling to floor windows on the East side of the room.

He heard a noise like a diesel train engine starting up, glanced in the direction of the railroad tracks. At 10° East of North over a house with a red roof and seemingly on the same level of a TV antenna and electric wires, he saw what he thought was a street light. It appeared about the same size as a street light. Later Reed estimated the object was about 600' from him at that time. Then he realized the light was moving, and that puzzled him.

It continued to move, and, following the contour of the ground, proceeded to the slope behind the house on the street north of the Thompson residence. The object which appeared to float, went out of sight in a small valley behind a row of small fir trees.

Presently it came into sight again, made an angle turn and was moving up the slope of the hill toward his home. In attempting to describe his feelings, Reed said:

I was shocked. I felt like I was going to have a heart attack. I knew something was odd, different out there. I thought I must be seeing things. I couldn’t believe my own eyes. It was coming right up between the bird feeder and the locust tree.

The strange thing had traveled approximately 600' and Reed had watched for several minutes, then ran for the camera lying on a shelf, stopped when halfway there and turned around and looked again. He grabbed the camera, approached the window and, standing 4' or 5' from the window, took a quick shot. He moved a step closer and clicked the shutter again.

The object’s speed was walking speed, about 3 mph. During this phase Reed was so excited he forgot to wind the film and got a double exposure. His aim was not the best and he got part of a curtain and tree limb. The object had just glided past the window. He thought he attempted another shot but is not sure.

In an attempt to get a better look and perhaps another photo, Reed rushed into the bedroom. He turned the film to a new frame and got the only picture, just as the object glided past the window. It then passed out of sight, heading in the direction of a large locust tree near the corner of the house.

The boy then hurriedly donned pants, shirt, shoes and coat, he had been sitting watching TV in his underclothing, and rushed outside to see if he could further observe the thing.

As the object vanished, the sound of a diesel train, which had persisted all during the sighting, stopped also. During the investigation Worley asked the boy if the object looked the same as it did in the picture and he said it didn’t.

It was silvery, the same color and brightness all over, and appeared to him to be more squat or rounded than it appeared in the picture. He also said he didn’t notice any ports or protrusions. but did note that it had a sharp, clean edge.

He judged it to be about 6' by 6', and when it approached an obstacle it would not curve around it but rather angled around. The noise he heard which he compared with a diesel starting up, was the same volume constantly when the object was outside the window and when it was 600' away.

It did not touch any trees and no broken branches were found.

Reed was questioned by the state police, 15 minutes by telephone and 45 minutes in person. No other witnesses have come forward or been found. Mr. Thompson stated that almost everyone in the neighborhood was away working at that time of the day.

Initially, Mr. and Mrs. Thompson didn’t think he had gotten a photograph and were amazed at what showed up on the fi1m. Reed told Mr. Worley that he was greatly relieved and it proved there was nothing wrong with his head.

Following are some observations by Mr. Worley:

1. On the Ieft side of the object on the glassy, highly reflective surface, there are plainly visible the reflections of tree branches. This indicates the object was up in the air near the tree and not thrown or hanging near the window.

2. It is significant that the boy saw the object as a shiny silver color, but that it photographed differently, a dark grey.

3. Reed Thompson’s actions and reactions are quite normal under the circumstances, bewildered. confusion. lack of action, his poor handling oF the camera which was his sister’s and with which he was not familiar.

4. A local photographer with many years experience gave his opinion that the photo was genuine, not a result of double exposure or montage.

5. If a hoax were involved in this incident. and it does not seem so. it would be more impressive to create a type of object which has been seen and described before, such as a disk or cigar.

his is the first fantastic flying bean jar reported to date, to our knowledge. The camera used was a Kodak Hawkeye. No information concerning shutter speed, but the film used was Ectochrome 127.

APRO attempted to obtain the photo for Bulletin use, but Mr. Thompson hoped to sell it to Time/Life or others.

At this writing, no large group has accepted it,;it was turned down by Time/Life and Dell publications, possibly because it does not resemble anything previously sighted or described. Therefore, APRO asked staff artist Richard Beal to do a drawing based on description and Mr. Worley’s sketches.