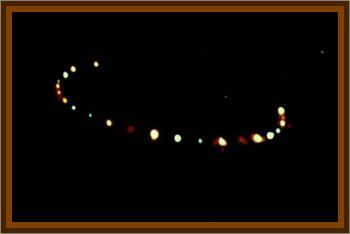 On April 29 in Hartford one person chronicled this experience:

Driving down 84 West towards Flatbush Ave exit. I spotted 3 floating orbs in almost a triangular formation. They were too high to be drones. They had an orangeish glow similar like that of a planet. I ruled out planets because the sky was cloudy. The orb at the highest point was moving slow, but erratic, while the other 2 seemed to hover in place.

On April 23 in Torrington, an astronomy buff took video of a possible UFO.

I looked out the window a few minutes later, and this object was flying directly over my head, northeast to southwest. I put my head out the window and listened carefully, but there was absolutely no sound. I went about setting up my scope. A few minutes later, this object flew above my head again, but in the opposite direction, from southwest to northeast. It was flying quite fast, but suddenly stopped still and hovered. I grabbed a pair of binoculars and looked at it. It was two solid red lights that were not blinking. A bright green light flashed several times between the two red lights.

On April 22, a Tolland resident said: My girlfriend, my friend, and I, were pulling out of my driveway to bring my girlfriend home when a large oval/egg shaped object that was a white with a green kind of glow to it flew passed my vehicle, and then after about 10 to 15 seconds, it's like the lights went out and it was gone with no track of it moving in a different direction or altitude.

A Middletown resident reported seeing a formation of 4 crafts in a straight line almost on top of each other.

Also in April a Darien observer saw an object zig zagging really fast and stopping for about 40 minutes or so.

In North Haven, a resident said on his way to work he saw 12 lights in formation and they hovered for 5 minutes. A few other cars pulled to side to witness the event. As we were watching, all 12 lights went off almost simultaneously. I'm not one to report events such as these but this is the second time I have witnessed this formation at this exact location on Rte 22 along All Saints cemetery in North Haven, CT.

A Winsted resident reported three multiple UFO sightings on the same night. In one case he said, The 3rd UFO almost looked like a blue star, however, it moved rather oddly. It would go from one spot to another very very smoothly, and stop suddenly, yet smoothly. When zoomed in, it looked like a flying saucer that was angled at an almost 90° angle. I was suggested to flash my high beams in my vehicle, and when I did, the UFO moved very rapidly, although it was a short distance. This happened multiple times when I flashed my lights. Not once did it make any noise. We observed this UFO for about an hour before we decided to leave.