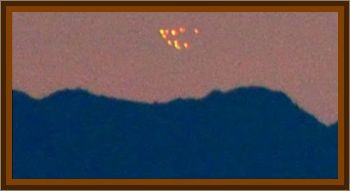 Randy Etting, a resident of Newtown, was taking a walk outside his home. A commercial airline pilot with over 30 years experience, he always looked at the sky, he saw a number of orange & red lights, approaching from the west. He got his binoculars and called his neighbors to come outside. The object by this time was a great deal closer and seemed to be over I-84, just east of Etting's home. The lights were shimmering like distortion from engine heat, but he could hear no sound.

As the UFO passed over I-84, cars in both the east and west bound lanes began pulling over and stopping. The UFO displayed a semi-circular pattern of very bright multicolored lights. Five motorists reported that, as the object became visible, a number of cars lost power and had to pull off the highway. A State Police officer sent to investigate, photographed the object.

Dr. Bruce Maccabee. His findings indicate the object was huge, perhaps over a 1000' across, and that the lights showed a definite pattern. He also indicated the lights seemed to have been flashing very quickly in some sort of sequence, giving the impression that some were out of focus while others were sharp.