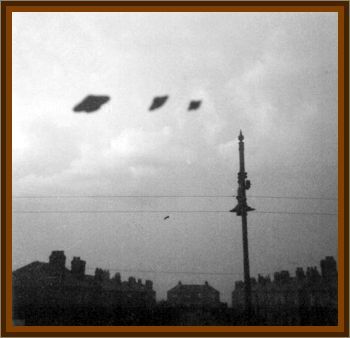 Stephen Pratt, and his mother Therese, were returning home from a local fish and chip shop when Stephens mother noticed a strange orange light in the sky as they reached Leslie Avenue, they kept the strange light in view until it became stationary in the twilight sky. Stephens mother, Mrs. Therese Pratt, sent Stephen into the house to get everyone out to see the unusual glowing object, the family came out to join Mrs. Pratt on the street whilst Stephen was sent inside yet again to get the families Kodak Instamatic 50 camera, the camera was a cartridge loading type set for cloudy. Soon after the photograph was taken, the UFO shot off at fantastic speed. The strange thing is that although only one object was observed that night, the negative showed three UFOs in formation.

Taken outside his home in Leslie Avenue, the picture has been studied many times - with many experts believing it to be genuine.

There were other witnesses to the event but sadly they refused to comment leaving the Pratt family to face the media frenzy alone. Over the years the family have undergone sceptical leg pulling and false accusation, nonetheless the Pratt family stand by the validity of the account and photograph and continue to do so to this day.